The Lamentations of Zeno by Ilija Trojanow 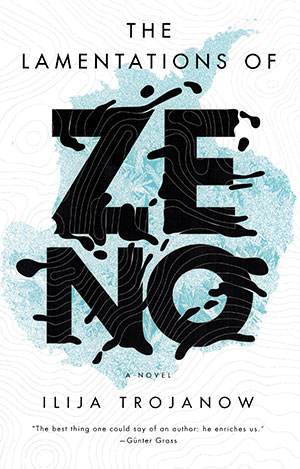 Zeno Hintermeier is named for the founder of Stoicism, a central tenet of which is that we should live in accord with nature and that we should promote moral progress. The demise of the Alpine glacier to which Hintermeier has devoted his scholarly life palpably demonstrates that today’s consumerist humans certainly do not live in such accord. What to do?

His work at the institute thus essentially over, Zeno gamely follows a colleague’s suggestion to give lectures to tourists traveling to the Antarctic. Now in his fourth year on the MS Hansen, he has just been elevated to expedition leader, and this is where he begins the notebook we read.

Like his glacier, Zeno’s marriage and social life generally have melted away, freeing him to conduct a shipboard affair with a young woman to help her family back home in the Philippines. But this relationship cannot—as scenes in their respective home worlds sardonically illustrate—extend beyond the ship. Then, too, Zeno increasingly hears a greater calling. Scientists like him have documented to death the damage we are doing, but mere data have not sufficed to get people’s attention.

Enter Dan Quentin, a Christo-like installation artist. To warn the world at large of the fragile state of this environment, Quentin plans a performance in which the Hansen’s 220 passengers will form a giant SOS to save the Antarctic.

It is around this SOS that a second narrative is arrayed. Interlaced among patches of advertising slogans, clichés, old saws, lewd jokes, snatches of pop songs, and whatnot, this narrative broadcasts ongoing reports about activities concerning the Hansen. Each segment of this narrative closes with, in all caps, “breaking news,” the first being “accident in the antarctic?” There is no more radio contact, no mayday has been issued, and the ship is heading back into the Atlantic. Why?

In his notebook Zeno rants about all our destructive behavior, but, signally, he reveals more. The barman who has seen it all here in the port of Ushuaia (this “end of the world”) says Zeno is worse than all the others, who are nothing but talk, because he understands what’s happening but sells his “knowledge for a few pieces of silver.”

The barman’s charge ringing in his ears, it dawns on Zeno that, as he tells Paulina, hell is not a place, it is the realization that you did not do anything when you still could, and should have. What he does you’ll learn in the final “breaking news,” but what I’ll tell you here is that, however tragic Zeno’s world, Ilija Trojanow’s depiction of it is trenchantly funny, and his inventive and acrobatic German has been rendered into felicitously engaging English by Philip Boehm.