The Queue by Basma Abdel Aziz 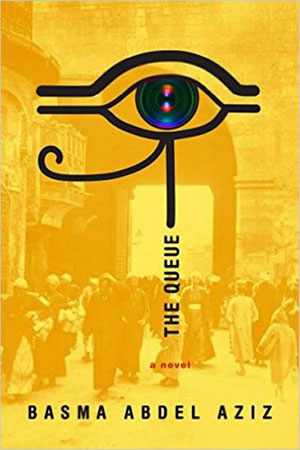 Building on an Egyptian literary dystopic tradition, Basma Abdel Aziz transforms queuing into a metaphor for the pervasive institutional and moral corruption of Egyptian life post–Arab Spring. Crumbling institutions, decaying landscapes, and disarray become the anonymous Middle Eastern city’s defining characters as the Gate, with its ironclad grip, drives the country into oblivion.

Egyptian journalist and psychiatrist Aziz is a prolific author of nonfiction and academic writings on the sociopolitical and psychological ramifications of institutionalized repression under Mubarak’s regime. Dubbed “The Rebel” for her staunch defense of human rights in the country, Aziz predicted “that the working class will start a revolution” in Temptation of Absolute Power,which was serendipitously released a day before the 25 January Revolution. Aziz distanced herself from the initial euphoria of the Arab Spring, foreseeing the bleak realities underlining the edifice of social solidarity.

In The Queue, citizens must line up at the Gate in order to receive bureaucratic permission for almost all daily activities. However, as the queue swells with people from all walks of life, the Gate refuses to open. In the heat of the Middle Eastern sun, a microcosm of this unknown city’s population begins to surface: there’s the galabeya-wearing religious fanatic; the motherly Um Mabrouk who provides refreshments and sometimes phone calls for those in the queue; the brother of a security officer killed in the clashes; and then there’s Yehya—a young protester whose participation in the Disgraceful Events has left him with a bullet wedged in his abdomen.

Dr. Tarek Fahmy perhaps occupies the most precarious position of them all. The Gate’s rigid procedures tie his hands and obstruct him from operating on Yehya’s mortal injury. Each of the novel’s seven sections begins with notes from his medical record, documenting his declining health and a diminishing chance of assistance from the Gate. Tarek is aware of how close the bullet is to Yehya’s organs, yet the fear of breaking the law compromises his ethical duty. As such, he finds himself unwittingly co-opted in the Gate’s overarching system of oppression.

Fusing the satirical and fantastical, Aziz reasserts the agency of individuals at a time of potent authoritarianism by confronting the state as a panoptical entity and exploring the psychological effects of the omnipotence of the Gate’s gaze.

Unlike classical dystopian literature, the novel is firmly located in a specific spatial and temporal setting. For some non-Egyptians, time may appear interchangeable and it could be anywhere in the Middle East; but realistically, the physical and cultural landscape is distinctly Cairo-esque. Furthermore, the cover’s Eye of Horus set against an opaque background of Egyptian falaheen undermines the novel’s anonymous setting.

The clichéd literary tropes of the dystopia canon work against Aziz’s narrative, forging a story that is all but too familiar. The narrative’s linear structure lacks the abstract ambiguity and thematic complexity that is distinguishingly Kafkaesque. Its inability to probe beyond the superficial and delve into the interiority of its characters makes the novel little more than a well-written piece of fictive social critique.