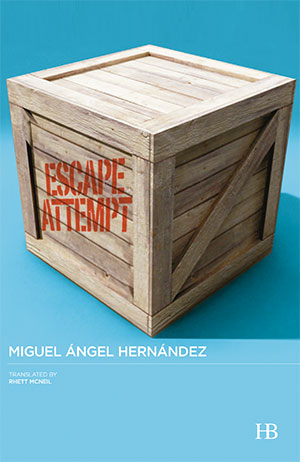 I remember being disconcerted and dismayed when I came across a posting on the Internet publicizing an exhibit in a museum where a stray dog had been tied up in a corner and starved to death. This self-same exhibit is mentioned in Escape Attempt by the Spanish writer Miguel Ángel Hernández. I was even more dismayed to discover that the plot of this novel is based on a real-life event exhibited in Paris in 2013 entitled Escape Attempt: Jacobo Montes and the Ethics of Distance.

In the novel Marcos, an art student, is coerced by his teacher Helena to assist a visiting “artist,” Jacobo Montes, in the latter’s latest “artistic” endeavor. Marcos is infatuated by Helena and agrees. He becomes the liaison between Montes, who is searching for a new way to express his art, and Omar, an African immigrant in Spain. Omar agrees to be enclosed in a coffin-shaped tank for a week with no access to water, food, or toilet facilities. Omar will be remunerated for as long as he can endure his imprisonment. In time, Marcos becomes disenchanted with the entire experiment and so worried about Omar that he pulls out of his unpaid assistantship with Montes. Later, Marcos returns to the warehouse where Omar was imprisoned, only to find the space empty. This “disappearance” pursues Marcos throughout the rest of his student life and subsequent career, until he attends an exhibit that purports to be identical to the prior Montes experiment and determines to discover the truth regarding the outcome of the experiment and the whereabouts of Omar.

Escape Attempt is a novel that functions at multiple levels of consciousness, morality, and determination. Marcos pursues his impossible dream of Helena, as Helena chases her untenable relationship with Jacobo. Jacobo runs behind fame from ridiculous and degrading “artistic” expressionism, as Omar sells himself to Jacobo for enough euros to get him home to Africa. Helena and Jacobo are vacuous in their absurd “artistic” activities, and Marcos is naïve in his innocence. Omar, of the four characters, is the only one that appears to act in a genuinely honest manner—degrading himself to get where he wants and needs to be.

This novel is an acerbic commentary on the ridiculousness of modern art and also an ironic look at the shifting tides of the refugee problems of the twenty-first century. Jacobo Montes himself sums up the content of Escape Attempt in his comment, “Art is a dirty thing, and there is no way to clean it without it losing its color.” Omar, on the other hand, has moved to Spain in search of a better life that neither he, nor tens of thousands like him, can possibly find. His determination to render himself a participant in a dangerous experiment speaks to the hopelessness of migrants throughout history—willing to take any risk to change their fate.

Is this a pleasant novel? No. Is it an interesting novel? Yes, in that it highlights the extremes to which human beings will go in order to fulfill personal desire.