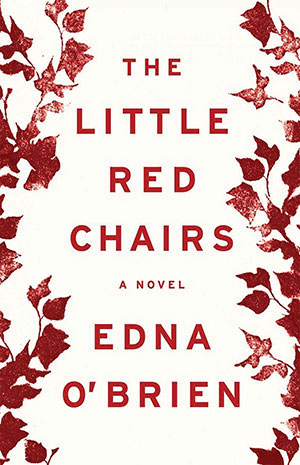 What if Radovan Karadžić—the mastermind of the infamous forty-four-month Siege of Sarajevo in which 11,541 Sarajevans perished—what if Karadžić did not in the war’s aftermath go into hiding for a decade in Serbia, as he is thought to have done?

Also, what if he did not there grow a white beard and play the role of “new age” physician, specializing in the treatment of sexual disorders, as reported? What if he was not arrested in Belgrade, as, indeed, he was?

What if, instead, he went to Ireland? Then what?

Celebrated Irish writer Edna O’Brien tells us in her latest, oddest, and yet strangely compelling novel.

Her story starts in a “freezing, backwater” Irish village, whose settled, edge-of-modernity rhythms are suddenly disrupted by the arrival of a mysterious, white-bearded stranger. Dressed in black, he looks like a holy man. He talks poetry, talks mysticism, talks medicine, and offers to the publican whom he initially meets a business card that reads Healer and Sex Therapist.

He calls himself Dr. Vladimir Dragan, and, when first asked, he says he’s from Montenegro. However, later, when pressed by a garda (policeman), he says he was born in Alexandria, and his name is common in Transylvania. “Is it related to Dracula?” the garda asks.

The novel’s other main character is Fidelma McBride, the attractive, forty-year-old wife of a draper. Her life, like her village, is in a maddening stasis at the time of the doctor’s arrival. Not long ago, her high-end, high-fashion boutique was shuttered. She had incurred debts, which angered and overwhelmed her sixty-year-old husband. The two are childless, and that’s the biggest emptiness of all in Fidelma’s life.

Before long, of course, Fidelma is impregnated by the doctor—in the oldest of old-fashioned ways. And, then, just after that, he is arrested by international police and uncovered for the demon he is—the fugitive mastermind of the Siege of Sarajevo, the man known worldwide as the Beast of Bosnia (historically, Karadžić).

That’s just the beginning of O’Brien’s alternative history, a story that blends conventional history with romance and homage to Bram Stoker. Yes, let’s not forget that Dracula’s author was an Irishman, as it will be helpful in understanding O’Brien’s strange, compelling, what if? of a novel.