We Are All Blue: Two Plays by Donald Molosi 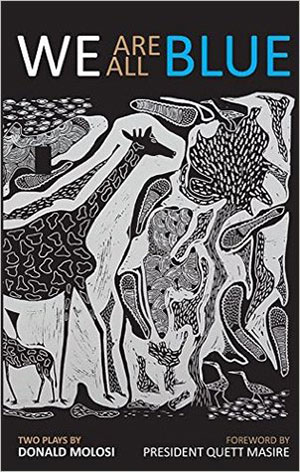 Despite the significant growth of publication of African drama in the West, Botswana remains underrepresented to a large degree, perhaps even unrepresented until now. The two plays in We Are All Blue by Botswanan American writer-performer Donald Molosi both began life as monodramas. The first play, Blue, Black, and White (2011), was subsequently expanded for a six-person ensemble. The two related texts provide an excellent insight into Botswanan history and identity.

Blue, Black, and White tells the story of the relationship between Seretse Khama, the first democratically elected president of an independent Botswana, and his white, British-born wife, Ruth, and how that relationship formed a model for Botswana’s own multicultural, multiethnic society. Framed through the device of multiethnic primary school students performing a play about Seretse, the drama switches back and forth between the classroom and the private moments and public conversations of Seretse that the students study and perform.

The interracial marriage is initially opposed by the villagers of Botswana and its rulers as well as the white governments of the neighboring Union of South Africa and Rhodesia. Seretse answers his domestic critics by responding, “Let them do what they want. Let the South Africans impose sanctions on us. Let them use their military forces against us, but we will never support their racism.” The play concludes with Seretse and the students celebrating Botswana’s multicultural history and identity

Seretse is also a character in Motswana: Africa, Dream Again (2012), the second play, but is not the protagonist—only one of eight characters Molosi performs in this monodrama, which takes the celebration of Botswanan identity in the first play and complicates it. Boemo, a young Botswanan, explains that “Motswana” means citizen of Bostwana, but the term actually only refers to people of the Tswana ethnic group. As the son of a Kalanga, he wants to make “a more elastic and inclusive identity.” He also recognizes that, “within the borders of Botswana, I am from both the dominant group and the subaltern.” What follows is a panoply of figures exploring Botswanan identity and even engaging the history of HIV/AIDS in the nation.

With a foreword by former president Quett Masire (Seretse’s vice president), the volume is a welcome contribution to African drama in English available in the United States.