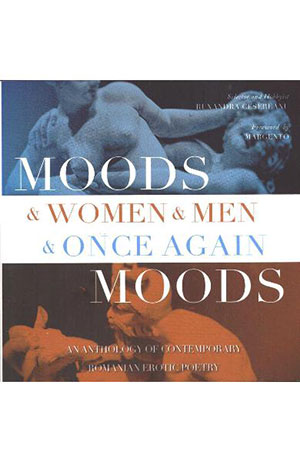 This kind of anthology drops readers with modest or no knowledge of the poetry of a nation into a labyrinth in which directions and destinations are far from clear and reading becomes an act of humility, or humiliation. It is an experience from which the unwary reader emerges with little sense of a whole but with flashes of pleasure and enlightenment, and only a little disappointment that the promise implied in the last adjective in the subtitle, though accurate, does not fulfill our lower desires.

The editor and the author of the foreword serve as something like guides, but their knowledge is so encompassing that many readers will stumble uncertainly in their wake. Ruxandra Cesereanu has read more than five hundred volumes of poetry since the 1989 revolution, and for this collection she approached more than seventy writers, forty-eight of whom responded.

Their contributions are divided into nine sections, with titles like “Little Endless Suavities” and “Semiotics of Eros,” on principles which are not always easy to discern, by section or as a whole.

The foreword by MARGENTO (Chris Tanasescu) attempts to provide some context, but since he parades one contributor after another, it is often difficult to disentangle and arrange poets by particular schools, and his characterization of individual qualities is more rhapsodic than analytic. To cite one of many examples, Floarea Țuțuianu’s poetry “has been seen as an inheritor of the viscerality and the self-immolation scenarios in Marta Petreu’s verse, with a strong eroticism that has in time acquired more and more mystical nuances.”

The foreword is offset at the end of the book by contributors’ notes, which more soberly record birth years, occupations, prizes, and various other distinctions without giving a clear sense of poetic genealogy or alliances.

But what of the poems? It seems impossible to generalize about so many writers working from different aesthetic principles. Many of the poems proceed at a headlong pace over two or more pages, as in MARGENTO’s “Oral Sex between Times and Places,” in which lines and phrases are enjambed or forced apart, or in Magda Corneci’s “Love Story,” which uses insistent repetition and ejaculatory short phrases to mimic the rise to orgasm and beyond, at the end of which the poet is made cosmic.

Elsewhere forested ravines, the juncture at which legs meet, and other metaphors are obvious ways of presenting the vagina. Sex and writing sometimes complement, sometimes conflict with each other. Sometimes more attention is paid to being under the skin than being on it. Occasionally, as in two of Gabriel Chifu’s poems, there is something like a story arc. Even a climax. A few poems, like Emil Brumaru’s “Tamarette,” deserve the label “erotic” in the popular sense. In other poems love rises and recedes, succeeds and fails, and sometimes, as in Mihail Vakulovski’s “I love you I love you stop bugging me,” where the (rejected?) lover asks her “to tell me / how much / you didn’t love me,” pleasure and pain are so intermixed as to be indistinguishable.

As the last century was ending, Cesereanu said in casual conversation that the trouble with Romanian literature was that there were too many poets. As long as work this good is being produced, it will take a long and fruitful time before readers of Romanian poetry reach the bottom of the barrel.