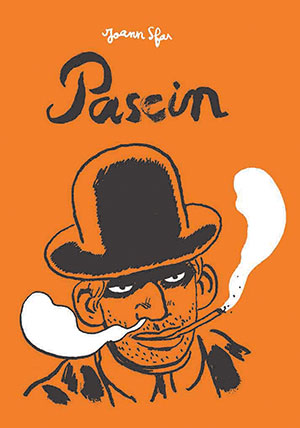 Through a series of vignettes depicting the personal life and sexual escapades of Julius Mordecai Pincas (Pascin), French cartoonist Joann Sfar presents a rumination on both the life of the artist and the nature of sex in relation to the artistic creative processes.

Throughout the work we see different perspectives on art, models, and sex from Pascin and his friends. Chaim Soutine prefers static objects, having issues with what can only be considered “performance anxiety” with live models, a nervousness about their immediacy and nudity. In the segment entitled “The Austrian,” we’re shown a painter who both needs to possess and is possessed by his model, a life-sized doll—this doll, “The Silent Woman,” having a deleterious impact on his social interactions with living women. Pascin’s criminal friend, Monsieur Toussaint, attempts to learn how to draw, first through observation and then direct manipulation of the model. Toussaint tries to understand why Pascin would choose to draw a model, instead of just having sex with her, if he’s attracted to her. To explain his own relationship with art, sex, and the model, Pascin explains, “When I’ve drawn a girl, I don’t need to jump her anymore.” Once the subject has been committed to canvas, he can distance himself from immediate carnal desires.

In a way, what unites these characters is the understanding that you can be a slave to your vices and passions, either being ruled completely by them or in fighting against them, or you can accept them for what they are and choose not to be driven by them.