Gatekeepers: The Emergence of World Literature and the 1960s by William Marling 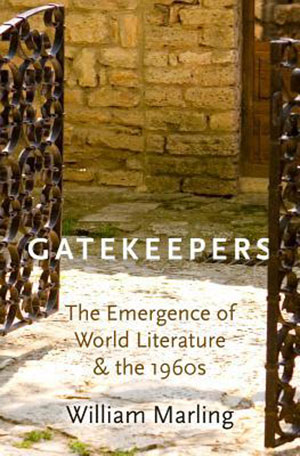 This excellent study of the catalysts for four writers—Gabriel García Márquez, Charles Bukowski, Paul Auster, and Ha-ruki Murakami—is fascinating to read. It analyzes the means by which these authors came to prominence and focuses on first readers, editors, translators, and publishers. Borrowing a bit too formulaically from the theories of James English, Pierre Bourdieu, and Randall Collins, Marling offers an engaging account of how four authors arrived on the international literary scene. Of note is Marling’s format of appending a contradistinctive example, a coda, for each successful author: in the case of García Márquez, Rigoberta Menchú Tum; in the case of Charles Bukowski, Diana di Prima; in the case of Paul Auster, his first collaborator (and first wife), Lydia Davis; and in the case of Haruki Murakami, the pop novelist Banana Yoshimoto.

This is the book that Marling wrote: it is not the book promised by its title and subtitle, Gatekeepers: The Emergence of World Literature and the 1960s. Marling claims he is studying world authors: a claim justified in the case of García Márquez and Murakami, both of whom are translated into the world’s major languages (forty-plus languages). The claim can be maintained with less certainty with Bukowski and Auster, who are generally known only in Europe.

There is a disjunction between the text and the title: Gatekeepers is both generic and general. The Emergence of World Literature and the 1960s is cleverly trendy, but no more significant than the fact that many of today’s prominent authors grew up in the 1960s. A book on world literature should at least mention the gatekeepers of world authors: Lin Shu, who made of Dickens a Chinese author, even though he knew no English; the Gorky Institute of World Literature in Moscow, established in 1932, which was primarily Eurocentric; Hon’yaku Bungaku, the translations of Western works during the Meiji period, which made Western authors familiar to Japanese readers; Joseph Brodsky, who wrote poems in Russian and translated some of them into English: he also wrote poems in English. Of course, the greatest gatekeeper in history would be St. Jerome, who translated the Bible into Latin as the Vulgate and thereby ensured its spread, ironically, with the conquests of the Roman Empire and the worldwide dissemination of Christianity over two millennia.

Although the chapters on García Márquez, Bukowski, and Auster are creditable, showing not only familiarity with the corpus but meticulous research into the private correspondence of these authors, it is the chapter on Murakami that I found the most useful. In fact, one wishes that Marling would consider writing a monograph just on Murakami. He is particularly informative about Murakami’s work as a translator of English, although it is curious that he doesn’t mention Jay Rubin’s commentary on Murakami’s prose: Murakami discovered his voice, Rubin contends, when he wrote Japanese like a translator.

The last chapter in the book, “Conclusion,” is disappointing: Marling writes insightfully about the technological changes in actual composition (word processing); the phenomena of entertainment conglomerates swallowing up traditional book publishers; the effect of the Internet and e-books on the reading public; the proliferation of demotic means of self-publication in blogs and personal webpages; the postmodernist bias of the New York Times,etc., but it is hard to discern Marling’s overall point in this catalog of recent developments.