Horses, Horses, in the End the Light Remains Pure: A Tale That Begins with Fukushima by Furukawa Hideo 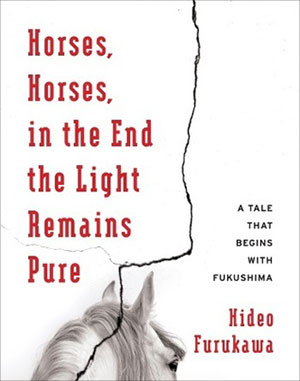 Although the cataclysmic destruction visited upon Japan on March 11, 2011, by an earthquake of unprecedented magnitude and its attendant tsunami still loom large in the national consciousness, it is the nuclear meltdowns at the Fukushima Daiichi power plant that are most painfully seared into the collective Japanese psyche (see WLT, Jan. 2012, 14–18). Furukawa Hideo (b. 1966) has, in Horses, penned a reaction to these events, memorialized as 3.11, that resists facile classification and challenges readers by continually shifting the focus and style of his narrative.

The narrative voice, well captured in translation, strains to be “edgy” through disjuncture: sentences compromising clipped clauses, terse fragments, words. The sense of fracture permeates the prose, a relentless reminder of the splintered reality born on 3.11 that has forever altered Furukawa’s relationship with his home in Fukushima. Reacting to and struggling against this overpowering sense of despair and loss finds the author retreating almost obsessively into the minutiae of the present. Reiterated epithets, such as “the car with the Kashiwa license plates,” seek to stabilize the “spirited-away time” that consumes the protagonist, casting him adrift and preventing him from moving forward. We come to realize that such stability is a chimera.

Horses is rooted in the “I-novel” tradition that privileges both confession and unmediated writing about the author’s current personal demons. Something akin to survivor’s guilt is the prime force in Furukawa’s case, but that does not stop the author from seeking out myriad alternative modes for expressing his concerns. At one point, Furukawa “beg[s] the reader’s indulgence for [his] dramatic turn of phrase,” yet he asks for that consideration too often and provides little by way of recompense. The long historical digression into the “otherness” of the Tōhoku region and the strained focus on horses as metaphor falter under the weight of the reality Furukawa seeks to process. So, too, does the oblique effort to link 3.11 to 9/11.

That this seemingly experimental novel is not terribly effective may be its true strength, for although Horses chronicles the visible effects of the natural disasters, it is of the secondary man-made disaster that Furukawa writes. Like this novel, that disaster resists easy comprehension beyond the most superficial. The translator’s afterword seeks to tame the sense of an inchoate text and, in some measure, succeeds; yet that the novel struggles, absent that contextualization, is a marker of its immanent power. How are we to understand, process, move beyond the devastation of 3.11 and, more importantly, the effects of the silent nuclear reality that will extend far beyond a single day commemorated in a simple number? In this, the subtitle is particularly apposite, for Furukawa, one of the first authors to write of these disasters, offers no solutions and has only scratched the surface of a far more complex and contentious story-in-the-making. The tale is ongoing.