War Music: An Account of Homer’s Iliad by Christopher Logue 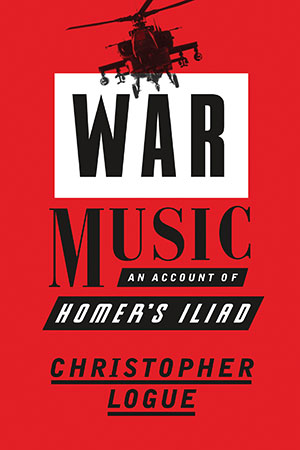 Christopher Logue’s recent volume of poetry, War Music, holds Homer’s deft portrait of the Trojan War up to the present’s light. In the preface to his translation of Homer (1791), William Cowper stressed the “fidelity” the translator owes to the original; however, the object of this fidelity is fluid in the contemporary era. Logue’s War Music is something other than a translation, but neither is it a collage of fragments meant to anchor us to the past; it is truly “an account” of the source material. Logue’s loyalty is to the truth of the characters’ emotions, but the poetry is fitted to contemporary English from its opening lines: “Picture the east Aegean sea by night, / And on a beach aslant its shimmering / Upwards of 50,000 men / Asleep like spoons beside their lethal Fleet.”

Vibrant assonance and smooth alliteration take the place of blank verse in imitation of Homer’s measures, while the image transfers the soldiers’ slumbering violence to their beached vessels of war.

Logue, who died in 2011, renders Homer beautifully but not transparently; his voice is an explicit frame that illustrates the original tragedy with images drawn from various places, many of them nearer to us than Homer. Logue compares Paris to Joachim Murat (a vain and fearless cavalry officer for Napoleon); he compares the surge of Achilles’ horses to the majestic rise of rockets on Cape Kennedy. A fragment meant to portray the flood of the Scamander against Achilles is composed of an enormous glacial seiche scouring an Alaskan fjord. The images are not merely interesting for their anachronism. On the morning when Patroclus leads his fateful last assault against the Trojans, Logue describes the dawn with an image worthy of Homer and just as timeless: “First sunlight off the sea like thousands of white birds.”

The present edition brings together several of Logue’s independently published collections on The Iliad and includes a final appendix of incomplete work intended for a sixth volume, “Big Men Falling a Long Way.” Poet Christopher Reid collected and edited these fragments, and he introduces them with a thoughtful essay on his process and intention. A cautious editor, Reid is careful to impose none of himself on Logue’s work. The resulting appendix, then, is slim compared to the other sections and obviously incomplete, but Reid, exhibiting the most essential fidelity, urges that even a glimpse into Logue’s completed work is better than nothing. Differing versions and working drafts of passages are the real treasure—the reader is able to see Logue’s mind at work, what the poet tried out, reworked, amended, or discarded. The version we have, with interpretive commentary between most of the fragments to explain its likely state of completion or revision, and where it fits within Logue’s decades-long process with the manuscript, reads with the same pleasure as the previously published volumes. Only a few places in the section lack context, but these shock the reader with the reminder of a life’s work interrupted.