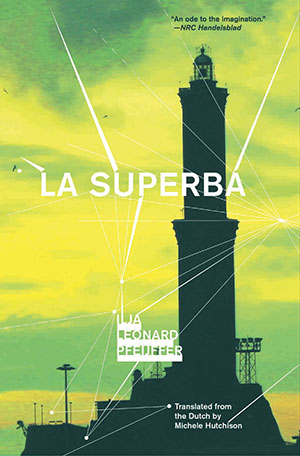 Anti-Europeans will see this extraordinary book as a knowing critique of a spoiled, corrupt, and quarrelsome lot of countries; pro-Europeans will admire its wit and its love of place and history. Inevitably, some will dislike its cruel mockery of intellectual and moral ambitions and its bizarre take on sex and growing old, all of which forms part of a whole, abundantly rich in provocative thought.

The book is set up as a “literary” work, a novel of letters, elegantly penned by “Ilja Pfeijffer,” a Dutch exile in Genoa, to his “dear friend” and publisher in Amsterdam. The letters recount an interlinked series of short stories drawn from life in the old port city—La Superba—where vagrants and eccentrics cling to existence in medieval tenements and in café-bars around tiny squares in front of Renaissance churches; the modern, peripheral bits of Genoa, where settled people live, do not interest Ilja.

His vignettes illustrate an old, local culture in which the show matters more than the finer points of the script and family more than society; where honesty ranks much lower than the ability to make people laugh or cry. Still, once you forget about expecting rectitude, it is a tolerant, fun place—regardless of how you like your fun. Wouldn’t you enjoy hearing the story about the literate transvestite prostitute whose leg was cut off? Or the complicated one about Ilja trying legal and semilegal means to crack “the system” and get a permit to buy an unsaleable theater, only to be fooled (again) by a fraudulent old society tart?

The snapshots of Ilja’s colorful Genoa are gradually replaced by insights into its darker places that house criminality and despairing rootlessness. The Europeans once knew loss of homeland well but have chosen to forget about it; the people-smugglers who send their customers off to live or die, as luck would have it, have been around for generations. The survivors without identity tend to end up in places like Genoa where strangers shelter in ancient networks of alleyways. Many are brutalized, but for as long as there is life . . . or, as the one-legged transvestite says: “I had to invent myself. . . . I dreamed myself up and then granted myself the freedom to exist.”