In the Company of the Muse by Dike Okoro 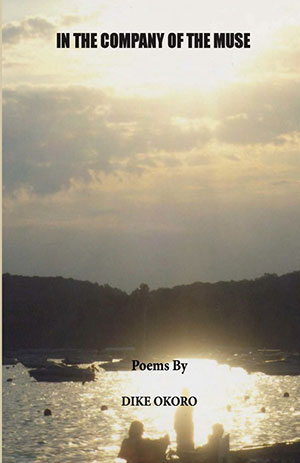 Dike Okoro’s recent collection of poems, In the Company of the Muse, is a work of substance in which the poet deploys versatile techniques to express his experiences in a controlled form. The collection is divided into three untitled sections. The first section almost uniformly deals with nostalgic experiences and remembrances of things past, including deceased people the poet admired. Among those the poet remembers are Ken Saro-Wiwa for his fearlessness despite the “nozzle of the gun,” Obi Wali who was brutally killed, and a three-year old who died from being burned. The poet recalls also his trip to South Africa with tributes to Mazisi Kunene, the great South African poet, and Nelson Mandela, whose epic struggle liberated black South Africans from apartheid. The section ends with “Robben Island” in these beautiful lines: “Let the drums beat. I have not come / to weep and sob over your past injustices.”

In the second section the poet also pays tribute to, among others, Miriam Makeba for her voice and Nelson Mandela for his inimitable smile. “General Hospital” satirizes the hopelessness of health facilities in Nigeria, and there is a refrain-like line of “general hospital.” The third section involves nature, tributes, and losses. Among those losses are Thomas Sankara, the Burkinabe pan-Africanist leader who was assassinated in a coup; Kofi Awoonor who died in the Al-Shabaab massacre in Nairobi, Kenya; and Caribbean authors Edwidge Danticat and Kamau Braithwaite. In a section filled with structural repetition, there are memorable lines such as “We built our home in each other’s joy” and “Between us a coast survives.” In “Earth, Oil, and Water Fever,” on the Niger Delta environment, the poet says, “Tomorrow’s tears are today’s fears.” In this environmentally conscious poem, the poet exposes the harm that oil companies are doing to the local communities.

Dike Okoro’s In the Company of the Muse helps revitalize the exhausted African poetic scene. Here and there he experiments, as in his tributes to Kofi Awoonor, where he has the halo tradition of the Anlo Ewe of Ghana and Togo in mind. He also has a one-line poem in which the title of the poem, “Because I Was Thinking of You,” is longer than the poem itself: “I left a stone in a pond.” Overall, in highly metaphorical language, disciplined form, and musical repetitions and refrains, Okoro writes poetry that doesn’t restrain itself to merely interesting reading but keeps our intellect awake with the realities of present-day Africa and its diaspora. This is a book that needs to be read for the joy of poetry and its aesthetic possibilities.