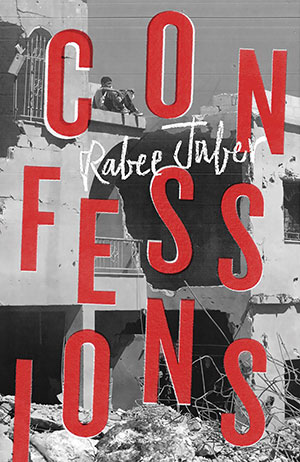 Several artists stand out among the many voices that a new wave of translation has made available to anglophone readers; one of these is the Lebanese writer Rabee Jaber, author of fifteen novels, editor of the weekly cultural supplement of the pan-Arab newspaper Al-Hayyat, and winner of the International Prize for Arabic Fiction. Jaber’s 2005 novel Confessions can now be read in an English translation by Kareem James Abu-Zeid.

After the kidnapping and murder of his son during the civil war, a Beiruti man joins the fighting as a vigilante. While stopping traffic one day at the demarcation line that divides the city in two, he opens fire on a car and kills everyone in it except for a little boy who is the age his son would have been if he’d lived. The man wraps the child in a blanket, takes him home, and raises him as his own, naming him Maroun after the son he has lost. Later, as a university student, Maroun learns the truth about himself from his brother on the eve of their father’s death; and later still, as an adult working for an engineering firm, he tells his life story to a writer named Rabee.

The dreamlike retrospection of Jaber’s digressive prose conveys his motifs—politics, war, identity, eroticism, romantic love, family ties, grief, sensuality, memory, imagination—by way of a narrator who complains that he can’t express himself: “We fell in love, and my mind was running wild, making plans, and running wild some more when she told me (on the upper floor of a patisserie on Mono Street that’s no longer there—she was eating ice cream and I was eating cake) that she couldn’t see me anymore.” Maroun harbors no rage and can’t empathize with his father; and yet he avoids self-pity, because he retrieves images instead of evoking them: he makes up by fortitude what he lacks in depth.

In a March 2016 interview with Epicenter, Kareem James Abu-Zeid suggests that a translation “shouldn’t sound translated,” adding that “if it’s poetry, for example . . . it should sound like something that a good English or American poet would write. And the same thing in a novel.” With Confessions, alongside The Mehlis Report (2015; English translation 2013) and the forthcoming Berytus: An Underground City, Abu-Zeid has made Rabee Jaber’s Beirut part of our imaginary landscape and added him to our constellation of fiction writers.