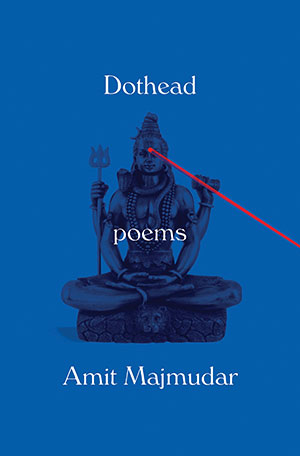 Poet Amit Majmudar’s one-hundred-page book is frequently eloquent, captivating, and powerful; however, it is also partisan, puerile, and facile.

One of the best poems, “Interrogation,” serves as an example of what Majmudar does best. Written in rhyming couplets, the poem narrates a torture session, providing just enough detail to make the reader wince. The poem is bearable because of oblique imagery and the restraint of the form, creating a kind of “braced pain”: “I saw a sun that weighed a kiloton / and the power cord by which it swung.” Another stunning poem is “Steep Ascension,” an elegy for a much-admired writer and intellectual who is dying after eight years of illness. Again, Majmudar uses form (rhyming triplets) to modulate the pathos of the situation: “I saw how age can leave the skull a hill / and the breath a white wind whistling in a hole. / He awoke when a gurney squealed down the hall / . . . and though I told myself that death begins / the work of stocking all the shelves again, / I knew this rare edition would be gone.” This is not to say that the poems are all written in accentual-syllabic, rhymed lines; we encounter prose, free-verse poems, and even a shaped poem. I do mean, however, that the best poems utilize Majmudar’s considerable technical capability in dealing with emotionally charged subjects.

In “Ode to a Drone,” we find a dazzling allusion to Gerard Manley Hopkins: “Hell-raiser, razor-feathered / riser, windhover over / Peshawar.” Here, however, we also have the irritating juxtaposition of Hopkins’s religious ecstasy and the dispassion of a “joystick-blithe [gamer]” assassinating unsuspecting victims. Majmudar associates Christianity with violence in other poems as well, particularly in “Lineage,” where he uses the biblical language of lineage (“And Flintlock begat Springfield”) for much of the poem to describe gun proliferation and violence in America. At one point, in describing how to prepare a bullet to fragment upon impact, he writes, “Just take a switchblade to your bullet / And carve a little cross”; the implication may be clever but is clearly specious. What’s worse is a ten-page prose “poem” titled “Abecedarian,” which is often puerile in its interminable narrative about the development of fellatio between Adam and Eve. This strain of sexual puerility persists in other poems as well. In “The Astronomy of Bond Girls,” we read, “And the implacable black hole / At our galaxy’s core / Pussy Galore”; in a poem about “mouthing off to God,” we read “Get down on your knees and do it. / Slowly. The way you were taught to.”

There’s an undercurrent of religious disrespect, even derision, here that is intolerant, even offensive. This is ironic in a book whose title poem, “Dothead,” enlists the sympathies of the reader for an Indian youth who is the victim of religious intolerance. Too bad. One is reminded of the Hindu tenets that all religions are true religions and the perceiver is the perceived.