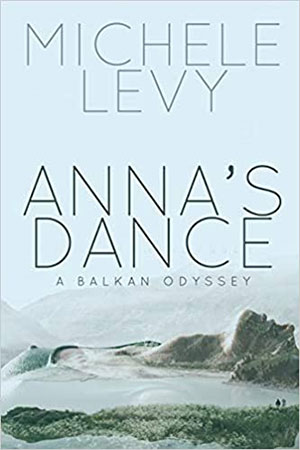 MICHELE LEVY'S debut novel, Anna’s Dance: A Balkan Odyssey, is a coming-of-age tale that follows the journey of an American girl with a tenuous grip on her Jewish heritage. The deceptively conventional premise of a collegiate backpacker is given complexity and drama as Anna unexpectedly deviates from the typical European tourist cities to explore the Balkans in the summer of 1968. Even twenty years out from World War II, the persistence of anti-Semitism makes her mountain passage fraught with danger. The story slopes suddenly into one of political intrigue, cultural identity, and the fight to resist erasure by the dominant power structures. Levy has previously published nonfiction on the history and culture of the Balkans, and her expertise shines as Anna is pulled deeper into the world of underground political resistance.

Anna’s Dance is sometimes surreal with its hairpin twists and turns and can feel breathless at times. It is difficult to say whether this is done purposefully, to mimic the tempestuous history of the Balkans and its shifting political allegiances, or whether the book could have used more time and space to foster a connection between its readers and the heroine. In many ways, Anna is not a heroine at all or even a true protagonist. The events of the story seem to just happen to her as she thumbs a ride on a half-hearted and fearful search for an identity she would often rather run from.

The people she meets along the way, however, have a depth, strength, and deep devotion to their heritage that is compelling and engaging. The history as told by these rebels and resistance fighters is fascinating and personal, and where Levy comes into her own as a storyteller. The history of the Macedonian Question and the Balkan Wars, as told by freedom fighters Spiro and Kosta in the dim light of kitchens and dance halls, becomes as relevant as today’s social justice movements, a grim but hopeful reminder of the constancy of civil unrest and the fight of the underdog for a fairer world.

Ultimately, their passion transforms Anna, who comes to a deeper understanding of the importance of her heritage and the preservation of the traditions of those that came before her, and those who will come after.