The Other Name: Septology I–II by Jon Fosse 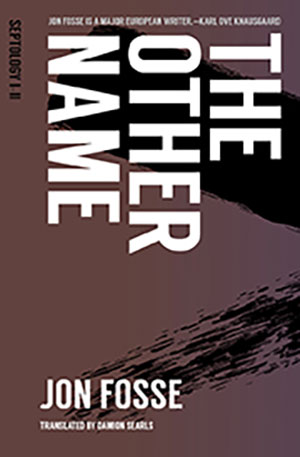 JON FOSSE is a well-known and revered multiple award-winning writer in his native Norway. He has published for more than twenty years across genres as a playwright, poet, essayist, children’s author, short-story writer, and novelist. He is often compared to Henrik Ibsen, Samuel Beckett, and Harold Pinter for his choice of subject matter, distinctively recursive style, and clipped dialogue with resounding silences between lines. His name is frequently mentioned for the Nobel Prize in Literature.

One of his best regarded plays is Someone Is Going to Come (1996), with its obvious allusion to Beckett’s Waiting for Godot. A collection of his short stories, Scenes from a Childhood, (2018) seems a pointed precursor to the overwhelming project that begins with The Other Name: Septology I–II, a three-volume series scheduled to be released through 2022.

Fosse established the language of his rhythmical stream-of-consciousness rhetoric in the five easy pieces of Scenes from a Childhood. He often repeats phrases or sentences several times in page-long paragraphs uninterrupted by any punctuation. Instead of turning the reader away, the propulsive prose has the opposite, positive effect of drawing the reader into the scene.

A lengthy passage worth quoting appears in the longest of the stories, “And Then My Dog Will Come Back to Me.” Perhaps a neighbor has killed the speaker’s dog; perhaps the speaker will kill the neighbor. The excerpt represents the quality of the prose and the imagination of the narrator.

Fosse captures the madness of the moment with his relentless staccato sentences:

Now I mustn’t be seen because if anyone sees me they’ll suspect me of the killing. Now I can’t let anyone see me. I hurry up the drive, stop, look down the road, up the road, but I can’t see anyone and don’t hear any cars. . . . I cross the road and start down the path. . . . And now he’s going to die, it’s going to be soon, he’s killed my dog and now he’s going to die. . . . I see my boat floating near the shore. . . . I go out onto the landing. I pull the boat in and then carefully put the pitchfork in the front of the boat.

Fosse brings the same passion and the same commitment to his characters into the first two volumes of The Other Name. There is virtually no plot. Style is more important than story.

As the title suggests, there appear to be characters who share a name. The novels drown in doppelgängers. The primary one is Asle, a widower (his wife’s name was Asles—this is not the last time that names look alike) and painter living alone in the village of Dylgja. He has infrequent contact with a nearby neighbor, Asleik, from whom he gets lutefisk and lamb ribs. Asle gives Asleik paintings to gift to his sister, Guro, perhaps as penance for what might have been a presumed affair.

Another Asle (call him Asle 2), also a painter, lives thirty miles south of Dylgja, in the city of Bjorgvin. Over the two days of the two-part volume, Asle 1 travels back and forth between both sites in order to deliver some of his paintings to the Beyer Gallery. During his trips, he reflects on past events, some of which may be real memories and some of which may be imagined.

Three provocative sequences include seductive images on a swing, a seesaw, and in a sandpit. There is a lyricism to the prose at the same time that it has a sexual connotation. One “grown-up child” pushes another higher and higher until she/Asles is “soaring and moving, hanging in the air,” then he/Asle 1 pummels her into the ground until their heartbeats can’t be separated from their breathing, then they lie in “bra and purple skirt” under his “long black coat,” which he/Asle 1 always wears.

It is sometimes difficult, sometimes confusing to sort out truth from fiction. Neither the narrator nor the reader is certain whether these events happened “sometime in the past” or are “just something [he’s] dreaming.” Or, in fact, is it “happening now in reality” to a couple Asle 1 is watching at a roadside viewing spot?

What is clear is that the Asle from Dylgja is a painter who prays. The same description of painting opens both parts of The Other Name. It is “two lines that cross in the middle, one purple line, one brown line.” It comes to be seen as St. Andrew’s Cross with sadomasochistic iconography. For Asle, it also contains a spiritualness, a “shining darkness” that he’s always trying to paint. He seeks “something of God in everything . . . the invisible in the visible.”

These first two parts of the series close with the counting of the rosary, the narrator holding a “brown wooden cross” between thumb and finger, reciting a prayer, breathing in and out, asking for mercy. In that Asle knows the light in the darkness illuminates the hidden subject, the same can be said for The Other Name. Out of the darkness of the deep prose comes the saving light of the penitent.

The Other Name: Septology I–II evokes the stunning autofiction of Fosse’s fellow Norwegian writers, Karl Ove Knausgaard’s (once Fosse’s creative-writing student) monumental My Struggle and Vigdis Hjorth’s controversial Will and Testament. Its striking characters and whiplash prose make for compulsive reading, engrossing from the start, unforgettable at the end. It is cerebral, challenging, and rewarding. It’s like reading an M. C. Escher print. It is a captivating meta-experience that leaves the reader Waiting for Fosse.