Four by Four by Sara Mesa 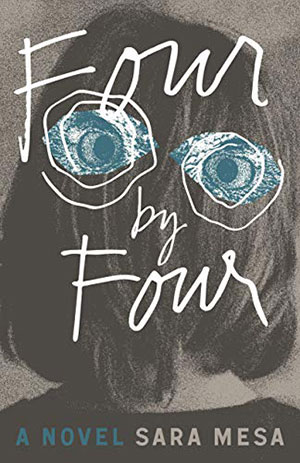 THE SETTING OF SARA MESA'S Four by Four is as intriguing as its premise. Wybrany College is a boarding school for the elite, but it opens its arms to a few special outsiders—outsiders who don’t belong and whom no one wants to notice. On the outskirts of the city of Cardenas, where society is always crumbling, it aims to give students a fighting chance in a difficult world. The threats of isolation are constant, however, and corruption seeps in from the outside.

Each of the novel’s protagonists has a unique perspective on the college and the world. Celia is an orphan with no trust left to give, who hates the school as much as she hates Cardenas. Ignacio is a scholarship student with an early understanding of pain and hierarchy, who wants nothing more than to be left alone. And “Isidro Bedragare” is an imposter who is simply desperate to survive. He thinks Wybrany is the best place to accomplish that. Together, their narratives weave a complex critique of love, lust, power, and human society.

Mesa uses every tool at her disposal. The language is short and precise, as if from a dream, yet each character has a distinctive point of view, sometimes cold and distant, sometimes uncomfortably intimate. The setting is timeless, as close or distant as we want, but the use of diary entries and third-person present tense builds the illusion of voyeurism. And at every moment, the silence speaks as loudly as words, both in the reticence of Wybrany’s students and teachers and in Mesa’s own writing. All these things add to the disturbing atmosphere of Wybrany College.

Unfortunately for English-language readers, some elements are lost in this novel. Mesa’s prose is unusual and deceptively complex. Katie Whittemore had done impressive work, but it is clear that some sacrifices were made between Mesa’s haunting narration and certain linguistic nuances. Certain customs may be lost on non-Spanish readers as well. However, some readers may barely notice. The features of Mesa’s writing and timelessness of the novel’s setting mean that the novel holds together well.

In the end, Four by Four is a mystery among mysteries. Things are deeply wrong at Wybrany College, but it’s not clear-cut how to fix them. Each character must fight both their innate human tendencies and the forces acting against them, and as in the real world, the solutions are personal.