A Song from Faraway by Deni Ellis Béchard 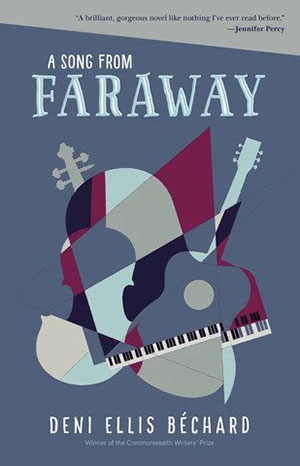 A CHARACTER IN Deni Ellis Béchard’s previous novel, White (2018), describes people as “clusters of expectation, spiralling away, galaxies, and then these miraculous crossings.” Another suggests that books show us far-off places to reveal what’s hidden.

A Song from Faraway presents a quintet of clustered narratives, spiraling through 1879 to 2008 and seven countries, revealing intricate connections. Readers observe characters in moments of becoming—some quiet and some startling, replete with contradictions—as they assemble some understanding.

The novel opens with an inheritance. Two brothers (with different mothers) consider their father’s literary remains—a screenplay manuscript and an older bound volume, by a man with their father’s last name, entitled The Angels Write Poetry with Blood—and various unanswered questions.

Readers spiral through l’Île Saint-Jean in Acadie (before the English deported the Acadians from what is now Prince Edward Island in Canada), a hunt for ancient Sumerian artifacts, a fiddle melody in the trenches of the First World War, a Montréal cabaret, a battle at Wounded Knee, and a Greenwich Village restaurant.

Language is uncluttered, employing an occasional metaphor—a man with “a wisp of Charlie Brown hair” and a dawn like “a faint, ugly elbow smear”—to elaborate. Sections of narrative are divided by time-and-place headings and further subdivided into dialogue-rich scenes, securing readers’ investment in seemingly disparate characters. The dynamic scenes balance the novel’s interior action.

In 2012 Béchard published a memoir, Cures for Hunger, and an essay, “My Favourite Crime,” works that describe his journey to understand his own father. From him, Béchard inherited a love for story and a willingness to test boundaries and take risks, which his father expressed through violence and crime and which Béchard expresses through narrative.

One could read A Song from Faraway as a continuation of that journey in fiction. As one character observes: “We return to the places of our fathers even if we have never been there ourselves.” The theme of family relationships and identity reverberates throughout Béchard’s work, but so do other challenging relationships: between isolation and community, discovery and transformation, forgiveness and appropriation.

Fundamentally, A Song from Faraway invites readers to participate in storytelling, to move through uncertainty toward clarity. When we hover between selves, when we lead double lives, when we ask impossible questions, “We blend with others. We glimpse what else we might become.”