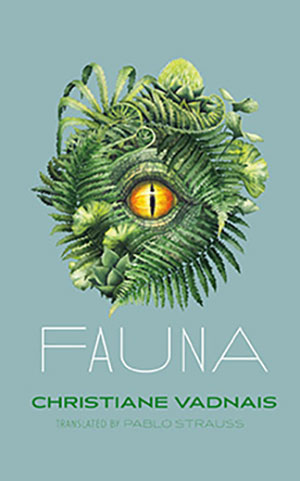 FAUNA, A COLLECTION OF dreamily surreal linked stories, is a recent contribution to the growing corpus of “cli-fi” (climate fiction) texts from around the world. Whether they optimistically depict human efforts to confront future climate catastrophe (Solarpunk: Ecological and Fantastical Stories in a Sustainable World) or warn readers about the myriad ways in which the environment will degrade/fight back (The End of the Ocean), these stories interrogate an often near-future world where nature forces humanity to renegotiate our relationship: the bee population collapse portends the end of human civilization, humans struggle to adapt in a watery world, or new predators rise up to threaten cities and towns.

Quebecois author Christiane Vadnais takes the middle road in Fauna, delicately tracing the decline of humanity’s dominion over nature near the aptly named town of Shivering Heights (near the Arctic Circle) while pointing ahead to new strides in human evolution. Each section carries a Latin title (“In Vivo,” “Ursus Maritimus,” “Fauna”), in keeping with Vadnais’s point that humans are obsessed with naming and categorizing everything around us. As the characters in these stories die or transform, these Latin titles become ironic signposts of a bygone time, when evolution moved too slowly to be seen with the naked eye.

Sprinkled throughout this collection are short interludes about dreams—specifically, musings on how dreams have evolved as humans have grown more comfortable in the environment that we have shaped for ourselves. These overt references to dreams increase our sensitivity to the dreamlike, uncanny stories about, for instance, a biologist giving birth during a snowstorm just after discovering a new and strange species of fish, or a group of people in quarantine from a virus that systematically kills them all (except for two, who turn into birds and fly away).

While the stories in the first half of the book are uncertain and seem to have little relation to one another, those in the latter half are much more confident, tangible, and even, at times, inspired. Vadnais’s portrait of a world reshaping people in its own image may not be particularly unique, but it has an ethereal quality all its own.