The Four Rings: New and Selected Poems by Fred Dings 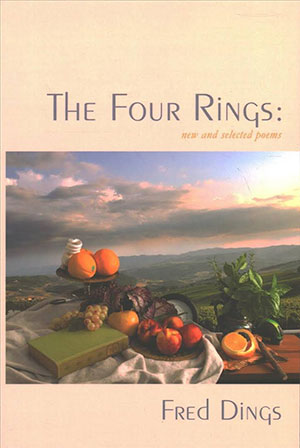 ENJOYABLE AND INSIGHTFUL, Fred Dings’s The Four Rings consists of striking images that accompany both narrative and lyrical expressions. His narrative poems, beyond their stories, are also refreshingly lyrical. The collection opens with selected poems from two previous works, then presents twenty-nine new poems. The “four rings” introducing the new poems comprise “interdependent rings of relationship: self, family, community, divinity.” Since the poet frequently contemplates Eastern concepts of reality, additionally, the “four rings” suggest the “four immeasurables” of Tibetan Buddhism. In “Meditation Caves of Tibet,” Dings concludes the book by joining “faint sounds” of “rising” words “opening at last like rings / on a lake to a clarity beyond all matter, / imperceptibly to us, perhaps, / but audible enough for a spirit world to hear.” In “The Bridge”—an image of transition—“arc[s] from here to there, / shaping what I know, to reflect and complete / itself on the flow of what I don’t.”

As depicted by Dings, the “rings” seem to involve style and craft as well as subject matter. Images of nature are comfortably situated with a variety of smart but unobtrusive allusions to figures such as James Wright, Theodore Roethke, Aeneas, Lao Tzu, along with references to Buddhism—all this while keeping a contemporary, domestic vison of family members and poet. The poet’s “interdependence” displays comfortable union within individual poems and in the collection as a whole. He links memory with ultimate questions grounded in contemporary experience. In “The Past,” Ding writes: “‘unremembered acts of kindness’ are never lost. / They whisper to our dreams / like a mother’s hum on the distant edge of sleep / . . . the distant suns of times past / mixing their light with the bright noon of the present.” He suggests “an intimate alienation,” and in “The Last Voyage” the poet affirms “a sudden liberation wanting at the last / what maybe was wanted from the start– / not transport, but immersion.”

Like so many of his passages, the poet successfully unites past and present with the abiding question of human destiny.