The Runaways by Fatima Bhutto 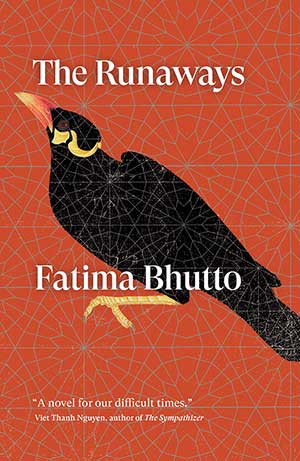 OSAMA, THE BROKEN BUT learned Marxist in Fatima Bhutto’s The Runaways, delineates a way of looking at societies that provides a much-needed critical approach to race, class, gender, religion, and sexuality: “The only way to look at powerful societies was through the people they excluded. The blacks encapsulated all the sorrow of their history in art—in music, in literature, in dance. The way the Sindhis or Baloch did here. Even as they suffered, the blacks sang to the world of beauty and terror.”

Fatima Bhutto’s The Runaways, with its complex fusion of ideas—personal, national, and transnational identity; the relationship between fervor and self-destruction; and the nature of the matrix within which we live—generates a complex fictional topography. The sensibilities of the novel’s protagonists suggest a new dynamic of power relations in which politics and selfhood, empire and psychology prove to be profoundly interrelated.

Migration, in the form of new social formations that transgress national borders, provides a key context to exploring this work of fiction. It is no secret that in this day and age, several new and transnational social formations have reverted to fundamentalist, exclusionary, and anti-internationalist interests. Also, transnational politics in the twenty-first century often lead to cultural and religious fanaticism by emphasizing a conception of identity between the “authentic” and the “demonic.” I would argue that Bhutto’s Runaways questions the resurgence of this sort of sentiment and the social, cultural, and political interests related to it.

In the character of Sunny, the author portrays the displaced Indian Muslim migrant who, as he gnaws at a new culture, is gnawed by the pressure to fit into his country of adoption, England. But he is demoralized by his father’s unsuccessful attempts to assimilate into British culture. For his father, Sulaiman Jamil, the civility, fair-mindedness, and rationality of the English are indubitable. Despite his father’s repudiation of his Indian past, he is met with a lack of sympathy in his culture of adoption. His father is the ultimate dislocated immigrant, abjectly mimicking the social and cultural values of the British.

Sunny represents the immigrant who remains empty and essentially invisible. In the attempt to re-create identity and become visible, unless the migrant is successful in creating a new transnational space, he or she risks either uncritical assimilation or monstrous reincarnation. Sunny’s alienation from British culture leads to an espousal of fundamentalist Islam as a way to find meaning in his origin and gain visibility. But, unbeknownst to him, the identity that he attempts to forge as a “sentinel” of the transnational and pan-Islamic Ummah Movement in Mosul, Iraq, is as monstrous and unaccommodating as the hegemonic projects of nation-states.

Similarly, the underbelly of Pakistan, an Islamic theocracy, is exposed by the dire straits that Anita Rose’s Christian family finds itself in, her brother’s recourse to the world of organized crime to enable the family to climb the socioeconomic ladder, and her exploitation through sex tourism. Islam seems to be the only common and fragile thread that links the various provinces of Pakistan together. Beyond that, the differences among ethnolinguistic and religious groups render the country a house divided against itself.

Issues of systemic discrimination and demonization of minorities that one of the protagonists, Monty, scion of a wealthy Sunni Muslim family in Pakistan, has never had to confront are brought up by his Christian amour, Anita Rose aka Layla. She makes him aware of radical notions that hold the privileged and wealthy responsible for bamboozling the poor, the extreme poverty that afflicts the Pakistani populace, and the facts of a reality pervaded by violence. In contemporary Pakistan, radical clergy continue to justify repression of the poor and dispossessed classes, criminalization of religious minorities, and sexualization of women with the language of culture and religion.

The radical Ummah Movement absorbs all three protagonists of Runaways: Anita Rose aka Layla, Sunny, and Monty. The fundamentalist Islam preached by the Ummah Movement provides Layla and Sunny a framework within which the fantasy of a strong, “authentic,” and heroic identity can be nurtured. However, Layla is just as objectified in her position as the face of the pan-Islamic movement as she was in the world of prostitution and sex tourism in Pakistan.

The patriarchal leader of the movement, Abu Khalid, attempts to establish a system of domination that is based on hegemonic constructions of a transnational Muslim identity. Such politics mark the resurgence of sentiments that were considered extinct. For the Ummah Movement, religion is meant to be a hostile and vindictive force that ignores art and tradition. Abu Khalid’s attempt to create an absolutist ethics that would enable him to be the interpreter of God’s will is embraced by Sunny but causes discomfiture to Monty.

Through the characters of Sunny, Monty, and Layla, the author suggests not only that the sacredness accorded to the notion of pan-Islamism is problematic but that the reality of exile and the inevitable sense of displacement that it generates is just as complex. I was disappointed that none of the protagonists embraced the challenge of leaving the past behind and working through it to create a positive selfhood. I was just as disappointed by the inability of the protagonists to recognize and nurture the progressive, emancipatory, and pluralistic vision that Islam has engendered in several parts of the world.