Breathing through the Wound by Víctor del Árbol 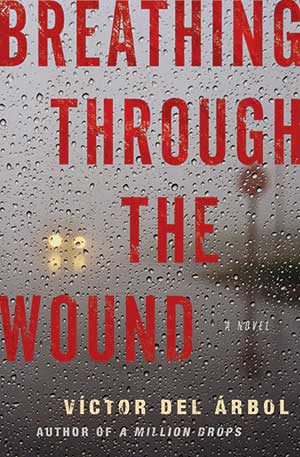 VICTOR DEL ÁRBOL served as a Catalan police officer for two decades ending in 2012, so one would naturally expect him, as with writers like Joseph Wambaugh, to draw heavily on his intimate knowledge of police work and procedure. “Procedurals” dominate the world of mystery fiction, especially on video. Breathing through the Wound, however, barely has a police officer in it. The main character, Eduardo, is a shell of a man living in Madrid, emotionally gutted by an automobile accident that killed his wife and daughter. He was a highly successful painter at the time but has lost his ambition and inspiration, doing only enough work to keep him in rent, alcohol, drugs, and psychiatry.

The novel begins when Gloria Tagger, an extremely wealthy woman, seems oddly interested in his art and through his dealer, Olga, arranges an appointment to discuss a commission. Eduardo isn’t really interested, but Olga is insistent, and he could use the money. When he reluctantly meets with Gloria, the noir thickens. She wants him to paint a portrait of Arthur Fernandez, the man who drunkenly crushed her son against the front of a shop with his Mercedes. He has used his wealth and influence to get an early release. She does not want Eduardo to contact Arthur directly, but rather observe him from a distance, and seems to believe that Eduardo can fully understand and convey onto canvas the inner darkness in Arthur’s soul. This intriguing proposition sets in motion a filigree of twists and discoveries that winds through a variety of unusual characters and nearly seven hundred pages.

A novel of this size can be intimidating, as they often lack the pacing and content to justify their heft, but del Árbol fills almost every page with enough intrigue, feeling for the characters, and plot twists to maintain the reader’s engagement. He changes the point-of-view character chapter to chapter. Each significant one gets his or her time on stage, and del Árbol is skillful in making them distinctive and convincing “in their heads.” His characters have complicated motives and histories, keeping the questions of their relationships to one another sufficiently mysterious, yet the revelation of their secret backgrounds and facts is paced out at regular intervals. Arthur’s father was involved in terrorism during the Battle of Algiers. Gloria’s family went through the Holocaust. Guzmán, now a private eye hired to find Arthur’s missing daughter, was a torturer for the junta in Argentina. He fell in love with a prisoner, helped her escape, and was tortured and mutilated himself. Ibrahim, who was Arthur’s cellmate in prison and now protects him, is an immigrant from Algeria. Mr. Who is an Asian gigolo in love with a garment-factory slave and plotting to help her escape from his boss, Chang. Graciela is Eduardo’s lonely neighbor. She has lost a breast to cancer, is raising a mentally ill daughter, and desperately hopes that Eduardo will become part of her family. There is also a shady film club run by an antique dealer that seems to produce taboo films for their entertainment. To say all this comes across as credible might seem a stretch when it is summarized like this.

However, over the course of the novel, despite the high drama, the story unfolds in a way that allows its details to sink in and become credible without slackening the steady forward motion. This is a credit to the author. Not only is the writing (at least as it is translated) very skilled on the sentence-by-sentence level—direct, vivid, never overwrought—but with all this complex activity going on, he manages to keep control of a complicated story.

Some of the echoes do bother me. The women are all distinctive, with distinctive histories, but there is a noir emotional commonality among them that late in the evening might lead a reader to momentarily confuse one for another. With the exception of Graciela’s mentally ill daughter, these women are all in a dark place, looking for a way out, but knowing they will not find it. Guzmán and Ibrahim sometimes come across as two sides of the same coin as well, though they are superficially quite different. However, if we try to imagine a novel in which some of these characters were combined into a more conventional three-hundred-page thriller, it wouldn’t be the novel del Árbol wrote but something much more ordinary and much less engaging.

Perhaps the oddest thing about the book is the way Eduardo fades as the book progresses. The novel starts with his situation, his problems, and the strange solicitation from Gloria Tagger. The novel is clearly Eduardo’s novel at the outset. Yet he is hardly present in the final chapters of the book, as if the author had lost interest in him. There are revelations, arrests, escapes, revenge, a couple of gruesome murders—one of them truly horrific. But where is Eduardo? He’s not at the center of any of the late action. He fades so thoroughly that initially you hardly notice his absence. He becomes like a guest at a large party who, because the other guests are acting up outrageously, slips out silently and unnoticed. It’s technically sort of rude, but, on the other hand, the party was nonetheless very enjoyable.