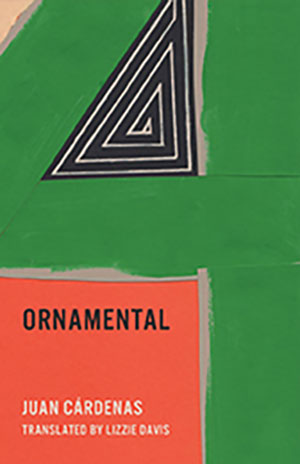 IN HIS THRILLING NOVEL Ornamental, Colombian art critic, translator, curator, and renowned author Juan Cárdenas masterfully tells the tale of the junction of an experimenting doctor, his wife, and his subsidized voluntary narcotic patient. The narrative, set somewhere elusive in suburban Colombia and expertly translated by seasoned editor Lizzie Davis, outlines the research of a potent hallucinogen, its advent among the suburbs, and its disproportionate effects on the working class. Meanwhile, in this nameless city, nameless characters congregate to form an unseemly patchwork of relationships, loosely held together by secrecy and sensual thrill.

While exploring the confinements of superfluous contemporary art, social disparities, and the carnal natures of humanity and its parallels, Cárdenas deploys robust, brusque chapters and macabre word choices that leave the audience floundering on the brink of exhaustion. While drugs permeate every echelon of society in Colombia, the author unearths the havoc wreaked upon innocent passersby and extremely destitute Colombians in particular; he exposes the rampant classist rhetoric that pervades not only Latin America but the world in aggregate.

The novel begins with the vivid reverie of a young woman, one of the four female volunteers for the testing of the novel drug, prattling in a narcotic-induced stupor. Perpetually shrouded in mystery, the experimental volunteer, dubbed “number 4” by the inquisitive doctor, remains a source of tantalizing confusion for the main character; she impedes his discernment while simultaneously bestowing vivacity upon the spiritually impoverished scientist. Similarly, number 4 disrupts the stagnant waters of the complacent marriage between the doctor and his wife, a cocaine-addicted aesthete and artist, by interpolating a note of spontaneity between the otherwise inattentive and absent spouses. Cárdenas orates the ensuing love triangle with prose that is relentlessly dynamic and picturesque.

How, Ornamental asks, do these disembodied dreams, unsung characters, and the cryptic city participate in worthwhile discourse and make their stories heard? How do you, me, and other readers—citizens with names living in named geopolitical regions—participate in the narrow conventions and homogenizing constraints of global society?