Wuhan Diary: Dispatches from a Quarantined City by Fang Fang 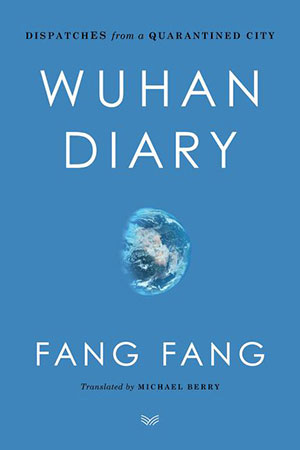 “IMAGINE THIS: the author Fang Fang did not exist in today’s Wuhan. . . . What would we have heard? What would we have seen?” asked writer Yan Lianke. In this sense, Fang Fang’s Wuhan Diary: Dispatches from a Quarantined City serves rather as a historical record than a private literary work—it is a fascinating eyewitness account of “the trivial, tragic, and absurd during Wuhan’s seventy-six days of lockdown” in 2020, which has reminded people of Defoe’s A Journal of the Plague Year and The Diary of Samuel Pepys.

Seemingly, the diary is all about quotidian details: weather, food, her toothache, or her classmates. The author is in her mid-sixties, she has diabetes, and she lives alone with her old dog. She becomes anxious only gradually, as the situation worsens each day. Despite earlier experience with another coronavirus (SARS) in 2003, the government fails to respond properly in face of the novel virus. From the time of the “lockdown,” when all forms of public transportation are shut down, most residents have to walk from one hospital to another in search of admission. Doctors and nurses are exhausted and overwhelmed by strenuous overwork. Among them is Li Wenliang, the “whistleblower” doctor, who first speaks out, warning of the danger, only to be reprimanded by the police. He dies in his own Central Hospital about one month after himself being infected.

Fang Fang’s anxiety turns into anger when the Health Commission officials attempt to muzzle sources of information about Covid-19. From TV she learns that more than forty thousand people in a neighborhood have attended a mass banquet—only several days later does the municipal leader admit that the virus is indeed “contagious between people.” She labels the incompetent government officials as bureaucratic and obsessed with formalities, tending to “drop the ball,” and letting written directives guide their work. According to the furious author, such unhelpful activity is “a form of criminal act.”

Fang Fang’s writing style is so conversational that the reader won’t be expected to find well-crafted, sophisticated passages in Wuhan Diary. Throughout the book she takes a matter-of-fact approach and records the ground zero of the pandemic. She not only talks about the misery of the common people but also considers her country’s mental health more generally. On February 14 she writes: “We need just a little more humanistic spirit . . . just enough so that when someone is infected with coronavirus, a crowd of people doesn’t end up sealing their front door with a steel rod so that everyone is locked inside.” Even though Fang Fang has been decried by some people for publishing heresy and demonizing Wuhan, many have praised her as the “conscience of Wuhan” and believe that she “gave voice to the fears, frustrations, anger, and hope of millions of her fellow citizens.” She never loses hope in the darkest time, because she can always find solace in small domestic comforts, such as when neighbors and colleagues frequently bring her face masks and food. She is moved to tears when medical teams from nineteen provinces and from the army flood into Wuhan, together with donated medical supplies.

Besides the ordeal of daily life and the physiological impact of forced isolation, Fang Fang also speaks out against social injustice, the banning of information, and corruption, for which she resolutely demands accountability. Some critics comment that although she might appear to “live meekly” during the lockdown, she writes “bold sentences”: “One speck of dust from an entire era may not seem like much, but when it falls on your head it’s like a mountain crashing on you” has become one of the most oft-repeated sayings in the country. Others have claimed she is “exaggerating the city’s darkness” in a way that will only provide opponents of China with more ammunition. In response, Fang Fang has declared that her purpose in writing the diary was “to remember”: only those who remember can someday pass these memories to future generations and ensure that history won’t repeat itself; or, as it has been simply put by Yan Lianke: “While memories may not give us the power to change reality, they can at least raise a question in our hearts when a lie comes our way.”