Not a Novel: A Memoir in Pieces by Jenny Erpenbeck 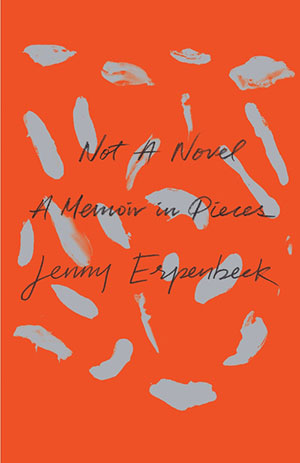 JENNY ERPENBECK’S fictional worlds offer us glimpses of what exists below the surface—of land, of water, of consciousness. In her novel Visitation (Heimsuch-ung, 2008), for example, the new tenants of a countryside home near Berlin are puzzled to find a crate filled with porcelain while digging a trench on the property. However, the reader knows what they don’t: that the first occupant of the house buried the family porcelain there in the 1950s before fleeing to West Berlin. In another novel, The End of Days (Aller Tage Abend, 2012), a Jewish family’s prized collection of works by Goethe “resurfaces” in an antique store in the 1990s after having been confiscated in the Nazi era and packed away in a basement. Ironically, the young man who discovers the collection in the antique store does not know it had once belonged to his family. In the novel Go, Went, Gone (Gehen, Ging, Gegangen, 2015), a person has drowned in the lake that is within view of the protagonist’s kitchen window. Because the body has not been found, swimmers do not dare enter the water.

Examples of the submerged, buried, silenced, and repressed abound in Erpenbeck’s worlds. In some of these cases, the symbolic object or person surfaces, as in the case of the porcelain and the works by Goethe, and in others, they do not. They are eventually forgotten, and life goes on aboveground. In Erpenbeck’s fiction, an underground and underwater topography of the socially repressed exists like a geological record of what has happened, and what continues to happen, in the visible world aboveground.

To read Erpenbeck’s latest book—a collection of autobiographical essays, acceptance speeches for awards, and university lectures from 1999 to 2014, cleverly titled Not a Novel—is to glimpse at the underground geological record of life experiences and influences that support her fictional worlds. The texts in part 1, “Life,” recount episodes from Erpenbeck’s life that could, in themselves, be the stuff of literature: A love story is preserved in a Stasi file. A family is held together by hope in the face of persecution, imprisonment, and expulsion. A child sneaks into the ruins of an antiquity museum bombed out during World War II in order to look at the classical statues no one else knows still exist. In these essays, Erpenbeck recounts a childhood in East Berlin shaped not by the interdictions of Communist society but rather by the dead ends and illogical spaces created by the artificial division of the city and the ruins left by war. Those abandoned spaces—disregarded by the adults around her and repressed in the collective consciousness—provided her the freedom to play as a child. Now, the memory of them gives her the intellectual space to write fiction and an escape from the mandate to stay busy and productive that drives her adult life in the capitalist system.

In the essays and speeches in part 2, titled “Literature and Music,” Erpenbeck reflects on her aesthetic heroes and influences, her writing process, the relationship between author and audience, reading as part of her life experience, and her love of music. In her essays on fairy tales, Ovid, Thomas Mann, Herta Müller, and more, she discusses the transformations and border transgressions that abound in literature. What she seems to value most is fiction’s ability to give us a new view on our reality by making things visible that we don’t typically perceive or think about and by bringing forth the communicative weight of silence. Her discussions of music are particularly elucidating, as she explicates the ways in which music informs how she thinks about narrative structure, repetition, rhythm, and silence in her own fiction.

In part 3, titled “Society,” Erpenbeck turns our attention to the social and political importance of rendering visible that which is typically invisible, that which is typically suppressed in the collective consciousness. Here, she focuses on the plight of refugees in Europe today. The essay “How Are You? Good?” is an obituary for Bashir Zakaryau, a Nigerian refugee whom she came to know while writing Go, Went, Gone. In this essay, she honors the life and achievements of Zakaryau, who suffered a harrowing voyage to Europe, was kept poor and socially invisible by the politics and bureaucracy that govern immigration in Europe, and who used his hard-won autonomy to help other refugees before he died. She endeavors to show us not how Europeans saw him—in fact, they did not—but rather, how he was seen by those he helped. The title of the final contribution, “Blind Spots,” emphasizes the theme of imperception. This address, delivered in 2018 at the University of Oklahoma as part of that year’s Puterbaugh Lit Fest, thus makes a fitting end to the collection. In “Blind Spots,” Erpenbeck draws on her own experience as an East German whose state no longer exists to address the plight of refugees, both those from Latin America being kept out of the United States and those from the Middle East and Africa being kept out of the European Union. She asks why some walls are desired while others are despised. That is, why do we insist on keeping some people invisible?

One of the pleasures of reading Not a Novel is just that—it’s not a novel. Each piece stands on its own and is dense and lucid, demanding pause and reflection rather than inviting one in for a sustained read. The pieces in this collection are best savored one by one, and by taking time to consider Erpenbeck’s views on writing, artistic influence, social justice, the meaning of childhood, and more. Her words stay with you. If you read an excerpt or two over breakfast or your morning commute, you’ll have something to enjoy pondering all day.