Voices of a Massacre: Untold Stories of Life and Death in Iran, 1988 & Lives Lost: In Search of a New Tomorrow by Saeed Yousef 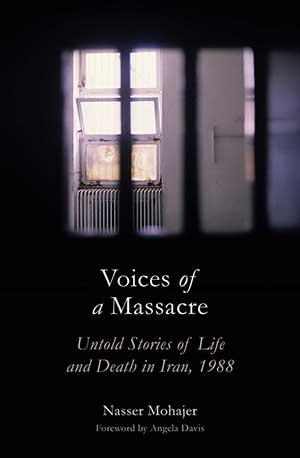 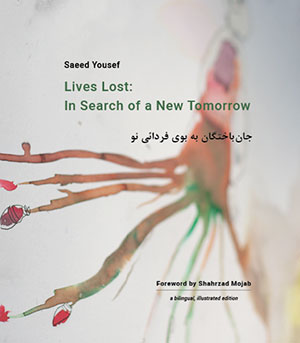 TWO NEW BOOKS surface, with urgency, the 1980s executions of thousands of political prisoners in Iran. Voices of a Massacre: Untold Stories of Life and Death in Iran, 1988 provides a multifaceted record of state violence and its astounding impacts. It arrays testimony and analysis from prison survivors, grief-mobilized activist mothers, and the grown children of the executed, placing these alongside historical essays and documents that consider both the event and its aftermath. Survivors here provide not just testimonial but analysis, vision, and leadership. Nasser Mohajer’s substantial compilation is a vital contribution to the record of this still-suppressed history.

Lives Lost: In Search of a New Tomorrow is an illustrated, bilingual edition of Saeed Yousef’s remarkable 1994 poem about the mass executions of the 1980s. Using traditional rubä’ï stanzas, Lives Lost triggers an artistic confrontation with state terror that resonates powerfully with Mohajer’s volume.

Striking forewords by Angela Davis (Voices) and Shahrzad Mojab (Lives Lost) guide Western readers’ twenty-first-century encounter with this history, making it impossible either to read these condemnations of a theocratic regime through the bellicose filter of Western Islamophobia or to sustain blind spots about the nature of this hard-right authoritarian government in the name of anti-imperialism. Rather, we are challenged to step up in solidarity with the leftists and the People’s Mojahedin Organization of Iran, a militarily focused opposition group, victims of the Islamic Republic of Iran, who fought against the Shah’s rule and then saw the fruits of the revolution dashed and commandeered by the Islamic regime.

Voices is a book about words in key ways. For many contributors, the drive to honor dead comrades means the retrieval of extensive detail and a pained apology for all that might be forgotten. Where the killings and cover-ups intended to silence and annihilate dissent, this accumulated telling, this layering of many voices talking—together—is the unstoppable reply.

We also hear the bleak absurdity of enforced speech—endless calls to renounce aloud one’s political affiliation or verbally embrace the trappings of piety. The prisoners’ defiant responses, at first purposefully ambiguous, mutate as strictures increase and the signs grow of an impending bloodbath. The most rapid-fire words come when prisoners adept at Morse Code tap-tap through prison walls to let the others know of the increasingly sinister developments as they unfolded during the summer of 1988.

In Lives Lost, it is the dead who narrate. The poem’s heroes are talking not from the safe harbor of an imagined afterlife but via the blunt expressivity of their new corpsification, their exposed, irrefutable materiality, just as their wills that said no also remain. In Ava Raha’s haunting illustrations, rosy blood splashes and pools, but the figures of the executed refuse to dissolve.

Restless, she shudders and trembles,
this youth
Look, her tongue still hangs from her
mouth,
She has a lot more to say to her
executioner, this youth
“Watch me dance on the gallows,”
she says
“Recognize my courage, my joyousness.”

In a Voices from a Massacre essay, it is living bodies that Shokoufeh Sakhi honors, specific and vital, beneath the would-be obliteration of the mandatory chadors the women wore at Evin, just as life’s apparency stands full, fairly humming, behind their poker faces and their “averted eyes.” For Forough Lotfi, whose son perished, it is the physicality of her response that shows how visceral motherly love builds and fuels political praxis.

That vitality also takes the form of mordant humor, making possible the bonds of mutual aid and shared sacrifice we see both inside and amongst the families who brought their protests to the world. The defiant survival-wit in Voices resonates with the raw sarcasm that animates Saeed Yousef’s poem and characterizes its solidarity.

Voices shows that solidarity extended beyond political affiliations, which determined not only the ward you were confined to but how, when, and whether you would be moved toward execution. Indeed, Iraj Mesdaghi describes Afghani foreign workers on prison grounds calling out to alert prisoners through the windows of the executions taking place.

The contributors to Voices of a Massacre raise large questions about how to look at the past, engaging the topics of memory and justice in crucial ways. If many accumulate a catalog of facts as a battle against absence, Chowra Makaremi, eight when her mother was executed, confronts what are “impressionistic” “heart-memories.” Former political prisoner Shokoufeh Sakhi refuses to “pick apart” the rush of memories or to “line them up one after another like soldiers.” There must be many ways to memorialize, and as a companion to Voices, Lives Lost shows how art can catalyze these partial, colliding images, facts, gaps, and voices.

To archive the history of those with lived experience is fundamental to the search for justice at the heart of both projects. The “justice-seeking movement,” particularly as exemplified in the Iran People’s Tribunal of 2012, is explored in chapter 6 of Mohajer’s volume. What is “justice”? Rather than revenge, payback, so-called emotional closure, or a “return” to a posited “normalcy” from before, justice here is in the making, a “gate” between the past and an emancipated future. Those for whom justice was sought need to be positioned not as “victims of violence” but as fighters in a class struggle arcing toward liberation.

In a robust closing essay, “Never Again,” Jafar Behkish points out how many survivors of the executions of the 1980s oppose the death penalty and reject recourse to the very torture they are themselves protesting. As presented in the manifesto generated by the Campaign for the Iran Tribunal, the “justice-seeking movement” calls for psychosocial and cultural solidarity with the oppressed, the creation and funding of new institutions not amenable to cruelty and violence, and a genuinely transformed Iran. The final stanza of Yousef’s poem reads:

My beloved yearning, my cause my
truth!
set deep roots in my chest, from the
time of my youth
The freshness of my life stems from this
tree
Freshened endlessly by the ferment of
youth.