Night in the North by Fabián Severo 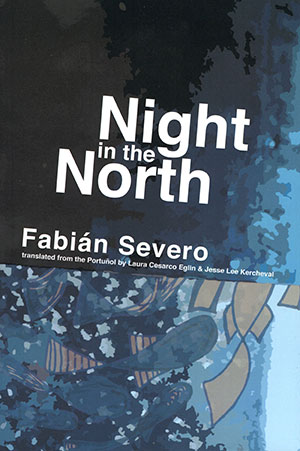 BORN AND RAISED IN ARTIGAS, a town in northern Uruguay across a river from Brazil, Fabián Severo writes in Portuñol, a regional blend of Brazilian Portuguese and Uruguayan Spanish. In Night in the North, which refers to the northern region of Uruguay containing Artigas, the blended language, together with scenes from the small, largely poor town, combine to create a remarkably intimate experience for the reader. Severo’s world is one of deep tenderness, where a mother will offer the owner of a small store her sweater in exchange for food for her hungry children, and another mother knits while “los gurí brincavan con las pesas / da máquina de tejer // the kids played with the weights / on the sewing machine” (“Forty-Nine”). For Severo, the language of Artigas is the language of freedom, maternal love, and indeterminacy. The language itself has syntactical freedom, “sticking its tongue at the dictionary” as it psychologically re-creates the sensation of still being in the womb, where, as Severo explains, he first heard and learned the language.

At this point, it is important to point out that the book is a bilingual edition. The English translation, while denotatively very faithful, does not capture the sense of intimacy that is forged by the way the language chooses the Portuguese word over the Spanish, and vice versa, usually in a way that emphasizes the concrete, much in the way that Anglo-Saxon root words have more pithy and rooted feelings than their Norman French Latinate equivalents (piggish versus porcine). The English version does capture the work’s indeterminacy because it relates so closely to the idea of place (and placelessness) and authority, which are reflected in the fact that “Artigas teim uma lingua sin dueño // Artigas has a language without an owner” (“Nine”), which allows it to adapt and evolve into the place itself.

Such flexibility imbues the language and the poems themselves with a dreamlike quality, so it is not surprising that Severo writes, “Artigas e uma terra pirdida nu Norte / qui noum sai nus mapa. // Artigas is a lost land in the North / that doesn’t appear on maps” (“Eleven”). Stating Artigas does not appear on a map (although it actually does), Severo gives the town a magical, “secret garden” intensity. Severo describes the people and socioeconomic divides of Artigas: Dr. Cardoso’s house, with many bathrooms, and his own “matchbox” house, with the bathroom outside and a door made of tin. The Portuñol itself creates a sense of connectedness, despite the income and social status differences. The minimalist structure of the poems guides the focus of readers and draws them into the small details and brief moments that create a detailed and colorful vision of that world. This is a world where the language itself teaches its inhabitants how to envision beingness in new ways, partially because “in the North (Artigas), dreams are very long.”

Many of the poems focus on the relative poverty of the residents of Artigas. However, no one resents their lack of material items; instead, the grandmothers constantly remind the young that life was much more difficult before. Further, the simplicity of life establishes connection to vision. After describing his friends’ efforts to win a dance contest where the prize was a hot dog and a glass of Guaraná soda, Severo observes, “A vida e asim / cuando menos un teim / más sueña // And life is like that. / The less you have / the more you dream” (“Fifty-Seven”).