The Heart of a Stranger: An Anthology of Exile Literature 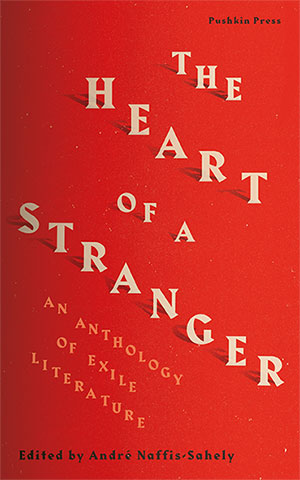 HARDLY A LITERARY POSITION exists that trumps that of the exile and the émigré. Of course, not every exile succeeds in fashioning from their banishment a new whole or fresh start, imprinting elsewhere; those who do succeed can acquire an aura akin to that of a saint. In this anthology, André Naffis-Sahely sizes up the phenomenon of exile across ages, cultures, and causes, from the ancient and biblical through the Dark Ages and into the age of nations, considering political, religious, and personal reasons for exile, right up to more contemporary notions of “cosmopolitanism and rootlessness.”

Many, but by no means all, of the authors of passages in this volume have themselves been exiles, including Naffis-Sahely himself. Yet in every case, care is taken to present excerpts that foreground exile and related states as their topic. Sometimes these converge—author and topic—as in the passage from Dante’s Divine Comedy, where the author meets the exiled Cacciaguida, who warns Dante of his own coming exile from Florence. More often, exile is the focus but not the fate of the author. There is an excerpt from Shakespeare’s Coriolanus, for example, and Longfellow spells out the tragic fate of Acadie’s Evangeline, severed from her Gabriel: “Thus did that poor soul wander in want and cheerless discomfort, / Bleeding, barefooted, over the shards and thorns of existence.”

Ample pages are devoted to tales of exile outside the Western canon. From ancient China, we get Du Fu, “Dreaming of Li Bai” (trans. Tony Barnstone and Chou Ping):

I’ve swallowed sobs of the lost dead,
but this live separation is chronic grief.
From the malarial south of the river
no news comes of the exiled traveller,
but you visit my dream, old friend,
knowing I ache for you.
Are you a ghost?
No way to tell with the long road between us.

The admirable effort at inclusion widens further with later twentieth-century and contemporary selections, including passages recounting (admittedly still “political”) cases of Iraqi, Uyghur, South African, and East Timorese exiles. Along the way, geopolitical hotspots emerge, among these of course ancient Rome, medieval Europe, twentieth-century European fascist states, and the Soviet Union—including exiles both into and out of, as well as those internally displaced within it, as exemplified in this excerpt from the poem “Homesickness,” by Marina Tsvetayeva (trans. Boris Dralyuk):

I do not care what faces see
me bristle like a captive lion,
or out of which society
I’m quickly forced into my own
fenced realm of silent feelings.
I’m like an iceless polar bear —
just where I fail to fit (won’t try!)
and am belittled, I don’t care.

A variety of genres and forms extends from traditional essays, poetry, fiction, and theatrical writing as far as Kaveh Bassiri’s alphabetical list, “99 Names of Exile,” which includes such entries as castaway, deportee, impure, pariah, and resident alien. Another interesting take comes in an essay by Breyten Breytenbach outlining his concept of the Middle World, which Naffis-Sahely characterizes as “an elusive transnational cultural space that lies beyond one’s origins and even one’s exile from one’s origins.”

Naffis-Sahely is candid about having consciously omitted several hundred exilic writers from this volume, for better or worse. Auden, Brecht, and Neruda are some of the authors he loves but could not “afford to feature in these pages.” Others he has omitted because he deems their exile too comfortable, like “resort holidays”—including, puzzlingly, Ezra Pound—or because he finds their state of exile “sickeningly self-satisfied,” naming Joseph Brodsky in particular. Yet others are omitted whose exile he doesn’t think was handled sufficiently seriously by the author, among these Ovid, whom he says “spent much of his time weeping, sighing, and penning servile poems which he hoped would restore his good fortunes in the capital.” Such reasons for omission can only invite criticism and debate; ideally, it can motivate a more exhaustive approach in the future.

Naffis-Sahely is not only editor but also translator of numerous passages in this volume, from ancient Greek, French, and Italian. He is joined by a platoon of other translators. Translation is the reagent by which this anthology ultimately catalyzes something greater in aggregate. These ninety-nine selections, carefully curated, provide a focused, crafted narrative, composed of many voices, which ultimately offer up to the engaged mind a universal shape of exile, for perhaps the first time. This is surely its greatest value—on a topic, moreover, that seems once more on track, sadly, to command only wider attention in the coming years.