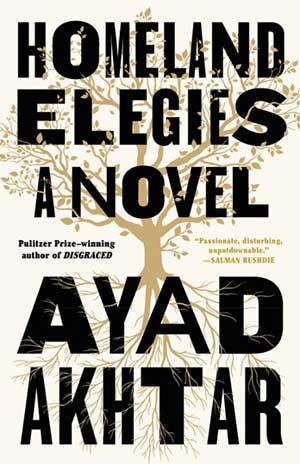 HOMELAND ELEGIES is Ayad Akhtar’s second novel following American Dervish, published in 2012. In the interim, Akhtar has been a prolific playwright, with Disgraced winning a Pulitzer Prize in 2013. Akhtar continues to reinvent himself as a writer, this time in the genre of autofiction. He forewarns readers in the preface that he has fictionalized many parts of his life, drawing inspiration from Alison Bechdel’s quotation in the epigraph: “I can only make things up about things that have already happened.”

This experimental novel is simultaneously a poignant reflection of the complexities of being a Muslim writer in post-9/11 America as well as a tender and funny tribute to his parents, particularly his father, whom Akhtar recently lost. Historical events like 9/11, the truck bomber in New York, and the rise of Donald Trump form the historical landmarks against which intense dramas of his personal and familial history are played out. In lieu of a plot, this novel follows an episodic structure, woven with many metafictional commentaries, dreams, diatribes, and debates about the critical reception of his works. In some ways, this is a reworking of the genre of the künstlerroman, a novel about the development of an artist.

Homeland Elegies memorializes Akhtar’s father, a brilliant interventional cardiologist whose innovations had once brought him dizzying fame and patients like Donald Trump. The novel encapsulates Akhtar’s love-hate relationship with his father, beginning with their opposed politics in the 2016 elections. By the end of the novel, we see an exhausted Sikander, fighting grief over the loss of his wife, a gambling addiction, and an undeserved malpractice lawsuit, admit that he had been wrong about Trump. Interspersed between these episodes, we see the visceral antipathy for Muslims unleashed on Akhtar and his father after 9/11, which returns with greater fury after the rise of Donald Trump. There are several harrowing moments in the novel, when Akhtar and his family are deeply unsettled by verbal and near-physical Islamophobic abuse.

Akhtar connects the rise of anti-immigrant and racist ideology to the failure of American capitalism to advance the hopes of working-class people in rural America. He reflects on the decimation of American manufacturing, the rise of the stock market, and the staggering burden of American debt. He shatters the “model minority” myth of South Asians by highlighting the systemic injustice faced by Blacks; hopes of Black upliftment tantalizingly raised and then dashed during and following the Obama presidency. But these painful and tragic events of national life are offset by moments of trenchant social satire and comic zest. Nothing is off limits for Akhtar: he writes about his checkered dating life with a Muslim woman he falls in love with and whose parting gift is syphilis. Every stereotype harbored about Muslims is shattered, from his whiskey-loving father to Riaz, the venture capitalist/gay philanthropist. In these moments of comedic exuberance, Akhtar is reminiscent of the early Salman Rushdie and of Hanif Kureishi. However, unlike these writers of an earlier generation, Akhtar’s quest for multiracial belonging is far more ardent during a moment in history that has unleashed even deeper layers of intolerance.