The Tree Stump: An Arabic Historical Novel by Samiha Khrais 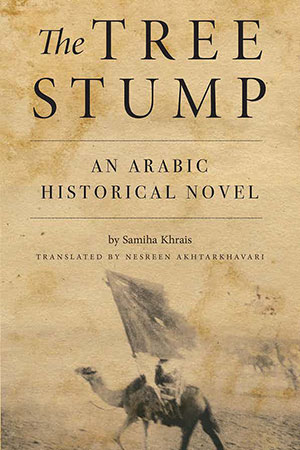 SAMIHA KHRAIS is a Jordanian novelist whose work has the imprimatur of those with heft, political and cultural, in her native land. The winner of, among other awards, the Al-Hussein Medal for Distinguished Creativity (2015), she addresses herself in The Tree Stump to the question of Jordan’s origins in the 1916 Arab Revolt against the Turks. It is perhaps inevitable, then, that one has a slight sense of reading, if not an official account, then at least one that will not displease her compatriots or the (admittedly largely benevolent) dynasty that rules over them. However, the historical background to the creation of the only surviving Hashemite dynasty, that of Iraq having been bloodily overthrown in 1958 and the Kingdom of Syria strangled at birth, is further complicated by the controversial figure of T. E. Lawrence, prominent in the minds of many putative readers of this translation because of a memorable film and in the minds of a few because of a brilliant, if idiosyncratic, autobiographical account of his role in the region, Seven Pillars of Wisdom (1926).

Indeed, the wish to provide an alternative account to Lawrence’s, one rooted in the experiences of Arabs, is avowedly central to the book. Information obtained during Khrais’s meetings with tribal elders “challenged the narrative that Lawrence and most Western historians provided,” resulting in a novel that celebrates the valor of Arab warriors fighting for their freedom and culture and the inspiration given by their strong women, whose strength, contra stereotyping views of the West, “is perceived as a source of honor and pride for the men.” One would expect the role of Western actors to be diminished in this perspective; unfortunately, the portrayal of Lawrence is both feeble and implausible.

Not that that is the biggest problem. On one occasion Lawrence is trying to photograph a Bedouin woman, who “ran away, her heart angrily pounding at the site of the stranger taking pictures of her people.” A long list could be made of insouciant errors like “site.” It would include “pours” for “pores,” “predication” for “prediction,” and a comment about “the ferry of battle.” The translation seems so slipshod that one hesitates to make a judgment about the value of the original. Are would-be strains of exalted eloquence the product of Arab rhetorical tradition or a careless rendition into English? Finally, many of the explanatory footnotes are unblushingly plagiarized from Wikipedia.