The Pine Islands by Marion Poschmann 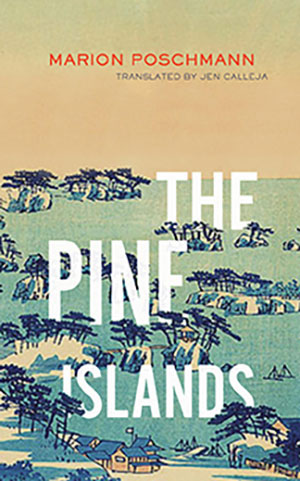 THE DELIGHT IN CLASSIFICATION in classical Japan, or perhaps the taste for precision, extended even to the aesthetic appearances of matsu, or pine trees, which could be divided according to their forms. Chokkan: upright trunk tapering off at the top. Mōyogi: the S-shape. Shakkan: trunk bent at a forty-five-degree angle. Fukinagashi: the windswept form. Kengai: the cascade. Bunjingi: the weathered, timeworn look, beloved of poets.

Gilbert Sullivan, the protagonist of German author Marion Poschmann’s first novel translated into English, The Pine Islands, travels to Japan on a whim, convinced by a dream that his wife is cheating on him. He is a middle-aged scholar, unsuccessful and disappointed with life, the foremost expert on a subject so ridiculous one can just imagine it as the fiercely defended turf of some embittered junior academic: beard styles or, to be precise, beard fashions and representations of the divine in art. A copy of Bashō’s Narrow Road, bought at the airport, convinces him to repeat the journey across the north of Japan, though instead of walking 2,400 kilometers to Matsushima and back, Sullivan travels mostly by bullet train.

According to Sam Hamill, who translated Bashō’s Narrow Road, the haiku master’s poem of wordless rapture in front of the famous pine islands reveals hints of mono no aware, an aesthetic category central to classical Japanese literature. Mono no aware—literally, the pathos of things—described a sense of rapture over the ephemeral, a perception of “natural poignancy in the beauty of temporal things,” as Hamill put it, an elegant sadness in the face of mortality, the pathos of evanescence, impermanence, the glimmer of the visible fading into the invisible.

Gilbert Sullivan, beard expert, also goes searching for the beauty of the transient, for fog, landscape, and the short-lived enchantment of moonlight on cherry blossoms. In an ironic twist, Sullivan befriends a younger, goateed Japanese man on the platform of the Tokyo train station. The younger man is preparing to throw himself under an incoming train, convinced he has failed his petrochemistry exams. Even worse, his goatee is false, a paste-on job. In Japan, a mostly beardless country, the professional class, or “salarymen,” do not wear facial hair. But young Yosa has been taunted for being an “herbivore man,” and artificial beards are available in Japan for those with threatened masculinities. Sullivan decides to distract Yosa from his self-doubt and suicidal depression by taking him on the journey, just as Bashō took his own companion. In turn, the younger man convinces the German scholar to add a visit to the suicide forest Aokigahara to the itinerary, and his eagerness to leap from rooftops and under train cars suggests a morbid side to the fascination with impermanence in Japan.

Can one still make an inner journey in the age of “turbocapitalism,” Poschmann asks? Perhaps the great adventures of the spirit, the narrow roads to the interior, are no longer possible in this era of smartphones and bullet trains. Her wonderfully ironic novel about a twenty-first-century person seeking an “inner understanding of the phenomena of the Japanese black pine” offers one potential itinerary.