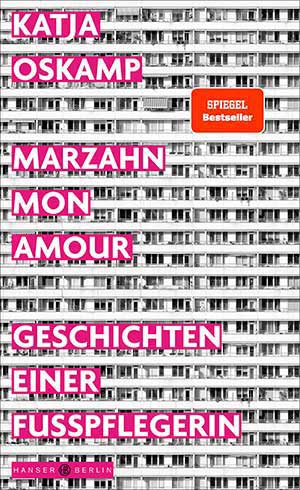 EVERY NOW AND AGAIN, you come across a book you instantly know you must read and will devour. This is exactly how I felt upon seeing Marzahn, mon amour, by the German author Katja Oskamp. The eponymous Marzahn refers to the district of high-rise Communist-era prefab flats in East Berlin, and this work feels like a declaration of love to this now-derided neighborhood and its aging inhabitants.

In her mid-forties and following major upheaval in her life, Oskamp decided to take a break from her career as a writer and retrain as a chiropodist. We are fortunate, however, that she did not entirely hang up her pen and wrote this book, which is an ode to the people she met while caring for their feet in a salon in Marzahn. She not only details her collegial friendships with her boss and the manicurist but also her interactions with customers. Due to the demography of the area and the service she offers, the vast majority of her clients are elderly. With the skill of a good listener, over the years she manages to tease out their life stories: they are the stories of ordinary people who experienced the best of East Germany, living in the modern and new apartments in Marzahn, only to be left to cope on their own in the march of capitalism after German reunification in 1990.

Oskamp tells their stories with a refreshing compassion—no poking fun at the former GDR as with Thomas Brussig and co., nor the anger and outrage of Jana Hensel. Oskamp is a curious observer and gleans intimate insights into the lives of the many who carried on as best they could when things got tough. Chapter by chapter, we are invited into their private sphere and bear witness not only to their tragedies, illnesses, and bereavements but also to their triumphs and their great fortitude. Marzahn, mon amour captures a piece of modern German history and brings it right down to the human level.