The Belle Créole by Maryse Condé 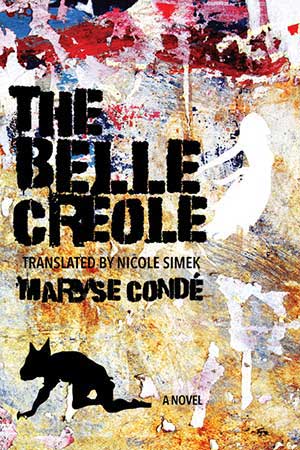 THE BELLE CRÉOLE, Maryse Condé’s twelfth novel, was originally published in French in 2001. The 2020 English translation does not disappoint. Nicole Simek’s translation, like those of Richard Philcox, retains the nuanced language and figures of the French version. It is rife with poetic prose that takes on the so-called modern malaise of the Caribbean: high unemployment, municipal strikes, violent crimes, decaying infrastructure, and family dispersal, among other indicators. By turns, the work is haunting, disconcerting, and illuminating, and it remains relevant and timely.

Although the novel addresses a specific event (the acquittal of Dieudonné for the murder of the white Creole woman Loraine), during a near twenty-four-hour time period presented in three sections (“Afternoon,” “Dusk,” and “Night”), it simultaneously covers the social, cultural, and economic history of the Caribbean region. From the start, a false binary is established. Is Dieudonné a pitiful victim or a coarse and dangerous brute?

Dieudonné, a twenty-two-year-old man, is orphaned at sixteen and sees no sense in belonging with his remaining relatives, a grandmother and aunts. His was an obsessive love for his invalid mother, Marine, whom he cares for until she dies. Left to his own devices, he works as a gardener for the rich fifty-year-old Creole, Loraine, and alternately nurses her through her alcohol-induced comas and her need for sexual gratification.

The setting is turn-of-the-twenty-first-century Guadeloupe, amidst municipal strikes, power outages, 35 percent unemployment, and violence. The country is split into two factions: “The fortunate, who possessed generators, and the unfortunate, who did not.” Dieudonné has no interest in politics, history, or religion, yet he maintains a curious friendship with a homeless poet, Boris, and Rodrigue, a young criminal friend who introduces him to crack. He finds solace aboard the decaying thirty-five-foot sailboat The Belle Créole, owned by the Cohen family, who left the country for better opportunities.

Dieudonné invites comparison with Richard Wright’s Bigger Thomas. Condé’s descriptions of the country also bring to mind Jamaica Kincaid’s A Small Place. The narrator is vintage Condé, both philosophically engaging and derisive. Of Dieudonné’s friend Boris, the narrator queries: “Did Boris have talent? This sort of question shouldn’t be asked, because it has no answer. For some, he was an unsung national bard, the only true champion of popular culture. For others, a weak rhymester and a first-class bore.”

The genius of the novel rests with its characterizations. There is no one character type, and characters’ actions escape predictability. From Arabella (described as “no doting grandma”) to Matthias Serbulon, Esq. (Dieudonné’s defense attorney), to Luc (a charming mixed-blood painter and also Loraine’s lover), there are no stock characters or easy pronouncements to be made about their actions. The novel is a satisfying adventure.