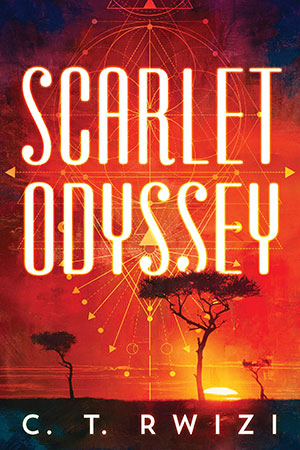 AFROFANTASY. It’s a largely unsung literary tradition in the making, one that grapples with the whiteness and westernness of mass-market genre fantasy and is exemplified by recent work by N. K. Jemisin, Marlon James, Rivers Solomon, and the present novel, C. T. Rwizi’s Scarlet Odyssey. In the best tradition of epic fantasy, Scarlet Odyssey is the first in a trilogy, a sprawling tale populated by dozens of characters exploring a complex world while taking on a dramatic, empire-sprawling quest, using magic, wielding swords and spears, and encountering legendary creatures.

Historically, fantasy fiction has looked like some version of medieval or early modern Europe. The last three decades, however, have seen an increasing number of fantasy novels set in worlds based on the histories and mythologies of non-Western cultures, so that it’s virtually impossible to name any world culture and not find a fantasy novel based on it, from the Aztecs to, now, the Xhosa and Zulu. Rwizi’s novel is very much in this tradition, taking Swazi cultures, languages, and folktales as the basis for a wonderfully realized secondary-world fantasy.

Not only is Scarlet Odyssey a novel treat in terms of its imagining a world that looks and feels very much like southern Africa prior to the arrival of Europeans, but Rwizi also goes beyond the norm to create an incredibly complex magical system that intermingles computer programming, environmental stimuli, a totem system, animal spirits, mecha, and so much more. Rarely does a first-time novel, let alone a first-time epic fantasy novel reaching toward six hundred pages, enthrall at the level of world-building in the way that Rwizi’s Scarlet Odyssey does. Rwizi’s use of Swazi cultures draws on traditional cosmologies and beliefs to give the book an uncommon sense of depth; it is a novel that demands attention to the meanings it creates/remixes.

Neither does the story disappoint. It follows a boy named Salo who wishes to become a mystic (taboo among his Yerezi people, since women are the learned ones and men the warriors), whose powerful mystic mother left behind dark magical secrets, and whose tribe is massacred in a plot by . . . well, I can’t tell you by whom, because that’d spoil the mystery. Salo is joined by other refugees from various attacks orchestrated by the Yerezis’ malefactor and the warlord Dark Sun, with chapters regularly switching perspectives to tell an engaging story of young people growing into adulthood and newfound powers.

With Scarlet Odyssey, Rwizi has written a novel that is expertly plotted, incredibly well thought out where magical and cultural systems are concerned, and also quite bloody. While not as literarily deft as Marlon James’s recent Black Leopard, Red Wolf (see WLT, Spring 2019, 80) or Jemisin’s record-breaking Broken Earth trilogy, Scarlet Odyssey deserves to be recognized as a powerful force in the growing Afrofantasy movement.