The Lying Life of Adults by Elena Ferrante 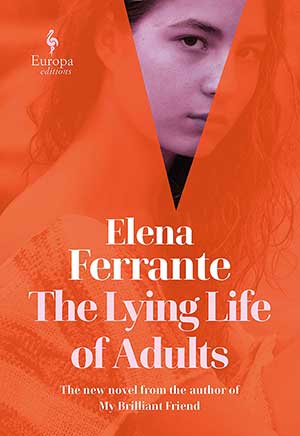 THE LYING LIFE OF ADULTS is Elena Ferrante’s first published novel following the monumental success of her Neapolitan Quartet, which concluded with the publication of The Story of the Lost Child in 2015. In 2017 the documentary Ferrante Fever hit the small screen depicting interviews with Jonathan Franzen, Roberto Saviano, and Hillary Clinton, to name a few. Since then HBO has co-produced director Saverio Costanzo’s television adaptation of the first two books in the Neapolitan Quartet, also to great acclaim, with a third scheduled for production. In 2018 Ferrante began publishing a weekly column for the Guardian, which ended a year later and was published collectively in 2019 under the title L’invenzione occasionale, in English as Incidental Inventions (WLT, Spring 2020). Most recently, Netflix announced that it is developing a series based on The Lying Life of Adults in cooperation with Italy’s Fandango. Critical books and articles on Ferrante’s writing continue to flood the academic and public spheres. Ferrante fever, indeed.

Originally published in Italy in 2019 to great acclaim, Ann Goldstein’s English translation was to be published by Europa Editions in June 2020, but with the coronavirus pandemic Europa pushed publication back to September, in large part to give independent bookstores the opportunity to sell the book. The expectations for the novel are high, and I am happy to report that it lives up to and even exceeds those expectations. The Lying Life of Adults resembles Ferrante’s pre–Neapolitan Quartet novels in its compactness rather than the expansiveness of the Neapolitan Quartet. The novel is a wonderful place to start if one hasn’t read Ferrante and a glorious return for the millions of readers who have.

The Lying Life of Adults begins with a traumatic scene that sets the narrative in motion. Giovanna, the protagonist and narrator, overhears her father tell her mother that their daughter is ugly. “Two years before leaving home my father said to my mother that I was very ugly. The sentence was muttered under his breath, in the apartment that my parents, newly married, had bought at the top of Via San Giacomo dei Capri, in Rione Alto.” The harshness of the remark is explained in more detail in the second chapter, and we find out that the “ugliness” refers directly to Giovanna’s aunt Vittoria, her father’s estranged sister.

Soon Giovanna becomes obsessed with Vittoria, and that obsession forms its own unhealthy relationship, one that has dire consequences for all involved. Giovanna forms a bond with her aunt because of the way Vittoria treats her like an adult, speaking to her of the realities of sex, relationships, betrayal, and the bonds that are supposed to keep family tightly together. Yet there is something dishonest and troubling about Vittoria. She is a wounded villain, embittered by the turn life has given her, which she blames on her brother. Vittoria is also one of Ferrante’s most complex characters.

With Faulknerian deliberateness, Ferrante’s narrator slowly uncovers the tenuous strands that hold all relationships together, especially those of family and the sense of security that entails. As Giovanna uncovers the strands of her own world, she not only discovers how much of those relationships depend upon false narratives but, perhaps most important, how the world expands as one enters into adolescence. We witness to Giovanna’s slow evolution into an autonomous individual, one with her own ideas and thoughts. Throughout the novel, the dissolving body and consciousness of the child Giovanna morph into what will eventually become the adult Giovanna.

Over time Giovanna loses all her moorings, and for a child those moorings are fundamentally tied to one’s immediate family, especially when that family is itself estranged from members of the extended family: brothers and sisters, aunts, uncles, and cousins. The transition to adulthood is messy and painful, and Ferrante illustrates this metamorphosis with brutal honesty. But even more than this metamorphosis, Ferrante demonstrates the dissolution of family history into myth. And yet there is also love in this novel; her childhood is not unhappy. Giovanna’s journey is a confrontation with her family history and her place in it. What she discovers is that her family history, like all family histories, has all along been largely fictionalized.

Later in the novel, a struggling Giovanna will question the world of adults: “What happened, in other words, in the world of adults, in the heads of very reasonable people, in their bodies loaded with knowledge? What reduced them to the most untrustworthy animals, worse than reptiles?” The novel’s greater theme explores how our lives are a collection of stories, some true, some not, distilled into patterns—but those patterns, as Ferrante has shown us throughout all her novels, are possibly nothing more than simulacra.

Perhaps in the end, The Lying Life of Adults portrays us all as unreliable narrators of our own lives, lying when it suits us; we tell ourselves big lies and littles lies, but lies all the same. The novel, which explores many of the same themes we come to expect in Ferrante’s oeuvre, exposes a cruelty and suffering inherent in all relationships. Most of the time this cruelty is dormant, but other times it manifests itself in spectacular ways, and that cruelty is never more powerful and damaging than when we exercise it against those to whom we are closest. The Lying Life of Adults is a triumph, a bright star in Ferrante’s expanding literary cosmos.

Andrew Martino is dean of the Honors College at Salisbury University, where he is also a professor of English.