Before a Mirror, the City by Nancy Morejón 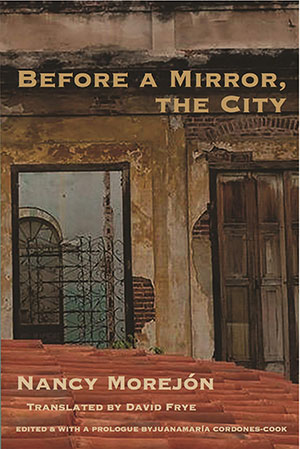 NANCY MOREJÓN HAS LONG been synonymous with Cuban poetry (see WLT, Summer 2002, Autumn 2019). In this succinct collection of poems, introduced by Juanamaría Cordones-Cook and beautifully translated by David Frye, Morejón is synonymous with Havana, embodying that dignified and downtrodden, anachronous place blessed with spirit and light; it feeds her soul, inspires her poetry, and breaks our hearts with its struggles and its rubble.

Morejón was the first Black Cuban woman poet to publish widely and be accepted as a professional writer, critic, and translator. The twenty-four poems here range over five decades, from some of her earliest collections, Amor, ciudad atribuida (1964) and Richard trajo su flauta y otros argumentos (1967), and poems from more recent collections, Paisaje Celebre (1993), La Quinta de los Molinos (2000), and Pierrot y la luna (2005). The selection herein reflects the city’s sounds, smells, and textures, in verses devoted to Parque Central in Old Havana, the Quinta de los Molinos, the port, and the emblematic Malecón. Presumably, when she stands before her reflection, we see the city and the city sees her (this city . . . will begin to stalk you / haunting your footsteps).

Morejón’s ode to Central Park (“Parque Central, alguna gente”) ends with a battle cry to her fellow countrymen. She describes a park passerby and beseeches him, and us, to “walk slowly and breathe deeply . . . / and give his whole life / with all his fervor / comrades.”

In one of her earliest poems, “Love, City Attributed,” from her eponymous second book, the dedication reads: “al lector, compañero” (to the reader, comrade), invoking a sense of selflessness and unity demanded and spurred on by the revolutionary times. In the poem she asks repeatedly, “who am i” and then: “does anyone hear the dream from my cursed mouth / who am i talking to.” To this reader’s mind, there’s no doubt about who Morejón is, or to whom she is speaking—she embodies all the elements of the city and the collective experiences of its inhabitants, and Havana and its residents are listening, now in English through these poems in her exquisitely translated voice. Comrades, indeed.