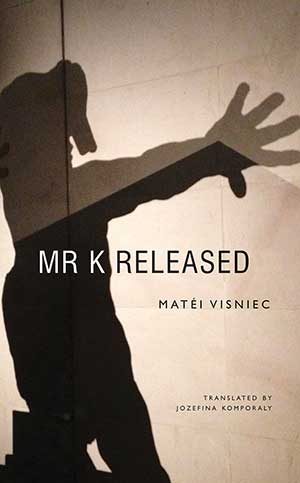 THE PREMISE OF MR. K RELEASED, written in prerevolutionary, self-imposed exile and published twenty years postfactum, is simple: condemned to prison for an unspecified crime, Kosef J is unable to understand why he is being released or what to do with his liberty.

As the protagonist’s name points to that of Kafka’s central character in The Trial, Visniec owns this heritage and evidently writes in a tradition of “freedom” (or “prison”) literature, just as Kafka himself called Dostoevsky “a blood relative.” Essentially, the book is a reinterpretation or “negative” of Kafka’s novella. This information is elaborated upon in the author’s original preface, not included in this English text, though the autobiographical dimension of the author not being able to adapt to Western freedom gives the book a more interesting dimension.

Such parentage sets the tone for a philosophical novel, driven by the protagonist’s sense of cognitive dissonance, and succeeds in doing so honorably. Visniec capitalizes on Kafka’s dramatic flair. Though Mr. K Released is one of his several novels, the Romanian-French writer is also a poet and most prolifically a playwright, and this shows. Farcical dialogue and cinematic jumps recall the dreamlike irony of a Fellini film, where, indeed, a single male protagonist always finds himself psychologically trapped. The corporeality and fast pace account for its reading like stage direction, and the prose is deliberately expository in the manner of a script. Characters are simple but candid, building strata of complexity as we are exposed to them repeatedly.

The overall effect is that of an immersive and atmospheric maze game that continually leads the reader back to the same place. The moral of the story, put schematically, is that there is no final destination, and the effect of the deliberately repetitive action is frustrating and exasperating, eliciting a reader’s reaction similar to the hopelessness and helplessness that the protagonist himself feels.

Both amusing and alienating, the variation on a theme that is Mr. K Released naturally raises questions for the contemporary reader in an increasingly troubled world, where the illusory nature of human liberty increasingly shows itself not to be a thing of the past.